USF Verftet with the two AiR studios on the 3rd floor

I am in Bergen, Norway for three weeks, following an invitation by USF Kulturhuset to live and work at the place where I had spent a three month residency in 2012. It was during that residency that I first read about Vinland, the legendary land Leif Eriksson – a Greenlander of Norwegian descent – had discovered and explored in North America from his base camp at L’Anse aux Meadows on the northern tip of Newfoundland around the year 1000.

The current project The Vinland Phenomenon is actually building on my research in Bergen in 2012 (see post From Bergen to Vinland and back), and so this is the perfect place to really start reviewing and assembling all the footage I have collected in Newfoundland this summer (see last post). 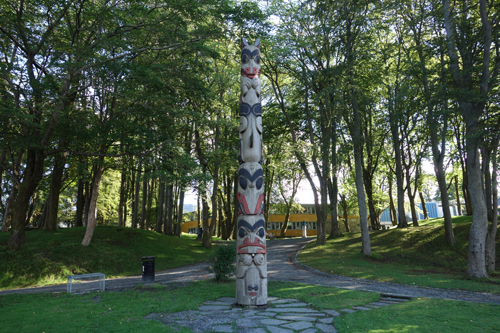 Totem on the tip of Nordnes, Bergen

Today I have walked to the park at the tip of Nordnes, a peninsula reaching into Bergen Bay and separating the old and the new harbour basins. And there it was: a huge totem looking westward across the ocean and towards the continent of its creation. 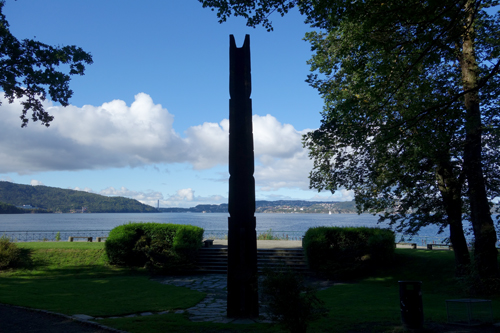 I had certainly seen it many times before in 2012, but only now did I get this weird feeling at its view: What if it was the other way round, and the natives of North America had travelled East across the Atlantic and discovered Europe? Was this totem a relic too obvious in size and location to be properly perceived? Well, of course not. The totem is a gift of Bergen’s twin city Seattle for its 900th birthday in 1970. But it does relate to the Viking age through the year 1070 then, and a panel says it also commemorates the Norse voyages across the North Atlantic – although they never made it to the North American West Coast of course… Or did they? (wink, wink) The theories and speculations about the extent of Vinland – many based on wishful thinking – are numerous, and new ones are emerging to the present day.