From Vinland directly to Valhalla

When I approached St. Anthony and L’Anse aux Meadows coming from Gros Morne Park yesterday, a large sign welcomed me to the area. 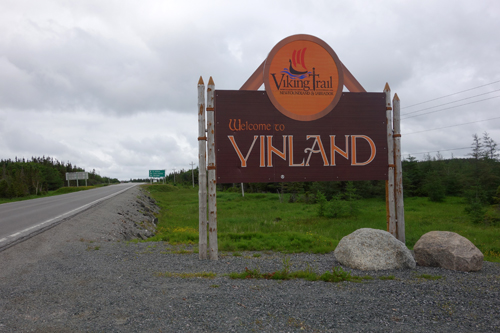 I was stunned: The sign hadn’t been there three years ago, and it looked as if the world knew about my project and that I was coming… And at the same time it felt completely wrong, as it seems to put an end to all the ongoing discussions about the location(s) of Vinland – or at least attempts to do so. And the fact that it is not a local advertisement but a sign put up by the Province, shows clearly that they have no intention of pursuing the quest about where else the Norsemen may have travelled than L’Anse aux Meadows any further, not even within Labrador and Newfoundland. They want to reserve that monopoly of the one and only place of a Norse presence for L’Anse aux Meadows.

Shortly after the sign I got to the Wildberry Country Lodge where I had booked for the week. The guy at the counter – smelling heavily of alcohol – told me that he didn’t know what they had done to him, but they had overbooked him for the night. He then found me a room in his mother’s B&B which was about 20 km onwards towards L’Anse aux Meadows, and carries the colourful name Valhalla. So Arriving in Vinland, I spent the first night in Valhalla. My friend just wrote me: I hope there’s a way back out of there…!