Finland: From Graz to Saari via Dortmund 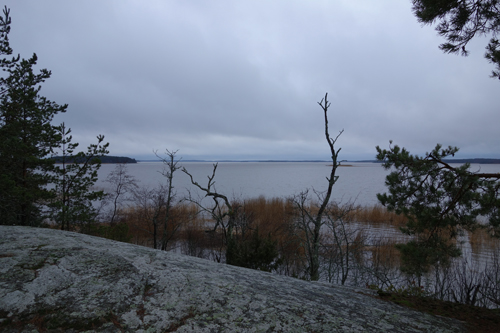 shades of grey: view of the bay near the Saari Residence

Two days ago I arrived at the Saari Residence, 30 km outside Turku in Finland. I have spent only 2 weeks in Germany between the residency at Rondo in Graz and this one. It feels strange to make a new home every few months… The fact that I have moved out of my old appartment before I went to Graz in October to move into a new one with my boyfriend and that I have stored all my belongings in my studio as this new flat is still under renovation, adds to the feeling of – what: freedom and lightness or restlessness and homelessness? Maybe a combination of both. I have been on two consecutive residencies before: Norway and Ireland two years ago. But it didn’t feel the same then as I had my familiar place at home. Now, coming home will be something new too…

But back to the present: My stay at Saari is intended to be a period of reflection on the life-sciences project I started to pursue in Graz, and hopefully production.
There are three aspects I would like to enlarge upon:
The cell as being the biological building block and a highly complex, self-sustaining whole; the first cell differentiation in early embryonic development; and the special role of RNA in the formation of life (RNA world).