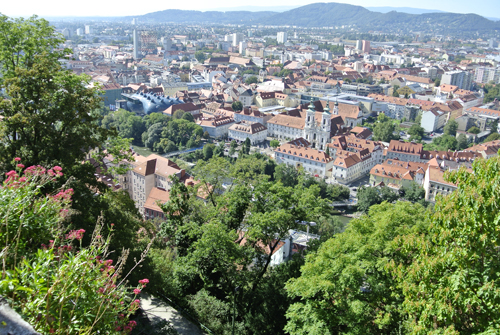 Graz as seen from the Schlossberg

I am in Graz for 3 weeks now – actually I arrived mid September but went home for a week to set up and open a show and take down another. I live and work in one of the 4 guest studios of the federal state of Styria on the 5th floor of the RONDO, a somewhat futuristic building at Marienplatz; 8 more studios for long term use by local artists are one floor down. I enjoy the situation: privacy and quiet for focused work and exchange and socialising if you want it. Also, the studio is really spaceious and after a short period of irritation I really like the unusual floor plan with curved outer walls now. 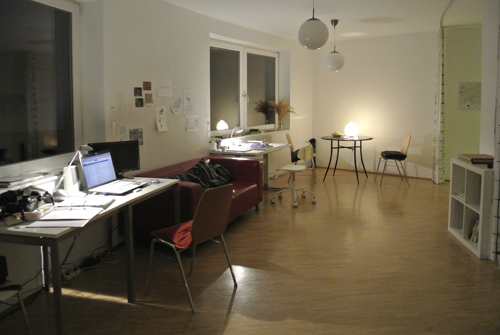 I came here to work on a subject that is hard to grasp as it seems everywhere at least in living nature: evolution. I was motivated to look closer at evolution theory after I became aware that the creationists’ movements, denying evolution and scientific thinking altogether, are still around – and worse: They are now (actually for about 20 years already) supplemented by those propagating Intelligent Design, a purely creationist and thus unscientific approach to account for the origin and diversity of life that avoids the notion of God (calling him the Intelligent Designer instead), drops some of the marginal but most ridiculous claims (for instance that the earth is not older than 6000 years) and disguises the whole movement with a scientific look through textbooks, institutes, research groups and related websites. Although ID is mostly still uncovered as creationism and banned from the science curricula whenever the case is taken to court, it is increasingly manipulating poltitics and education through private platforms. It is really frustrating me that this movement that aims to re-establish a public state of faithful ignorance comparable to that of the Middle Ages cannot finally and permanently be defeated. (An entertaining background report of the history and aims of ID and creationsim – in a rather poor layout – can be found here.)
Anyway, the hardly very important good thing about ID for me is that it awakend my interest in evolution theory and thus biology, as Nothing in biology makes scence except in the light of evolution. (Title of an essay by the evolutionary biologist and Russian Orthodox Christian Theodosius Dobzhansky) And now, I am completely fascinated by all the processes – from large to small scale, from short to long term – that are involved in the creation, maintenance and diversification or rather adaptability of living organisms.

So far, I have read a lot – about Darwin and his theory, about cells, genetics and molecular biology – and I have made first contacts to Peter Macheroux, Prof. of Biochemistry at the Technical University Graz, and his group whose expert field is molecular enzymology, enzymes being special proteins that trigger basically all processes in the cells. 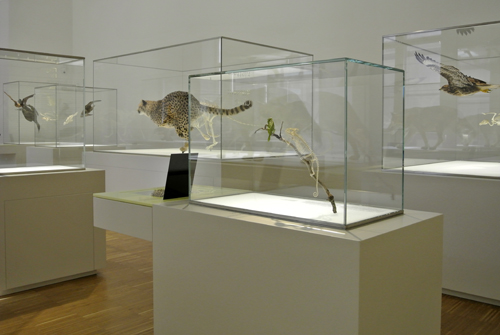 Besides I gave my debut as an animal observer (funny enough that this happens here and not somwhere in the wilderness… must be related to my new affinity to biology): On one of my first days in Graz I visited the Schlossberg, as everbody does. Up there, flying among some flowers hanging from an ancient wall I saw it for the first time: Macroglossum stellatarum or the Hummingbird Hawk-moth. (Of course I only found out about the name later online!) – I really thought it must be a humming bird until I saw its antennae. Since then I have gone back to the same place almost every day and I made a series of beautiful observations that I could partly also catch by camera. The Hummingbird Hawk-moth (german Taubenschwänzchen oder Kolibrifalter) is actually not a rare or endangered species – and indeed I have seen several of them by now – but their natural habitat is the Mediterranean and they are seen to move further North to Middle Europe for only a couple of years now. 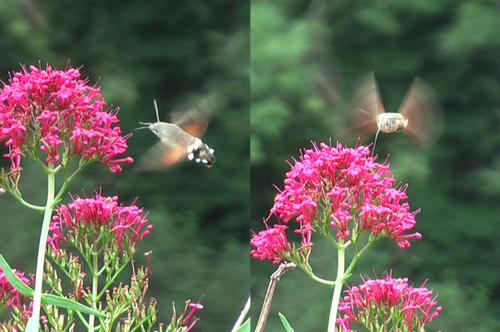 If and in what way the recordings of Macroglossum stellatarum might enter my work, I don’t know yet. Actually, I am still in the phase where I have to find out in more detail what aspects of evolution I will focus on (roughly I want to include genetics, early ontogenesis – where cells first specify – and palaeontology – fossils as evidence for evolution – and possibly others) and how to approach them… I will meet with the head of the Institute for Zoology at Graz University and the chief curator of the zoology collection of the Natural History Museum upcoming week. Moreover I hope to get in touch with the Institute for Geoscience that among others specialises in palaeontolgy. – And hopefully, at some point all information and footage will start to merge like the pieces of a puzzle and give an image…