Walking under the arcades of Georgetown I didn´t know that a place like this still exist in this world. 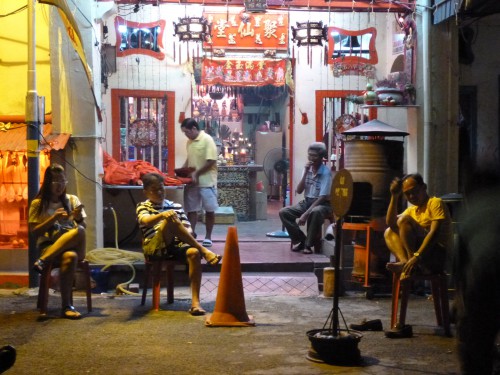 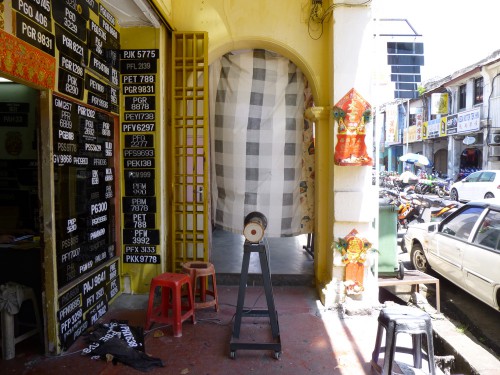 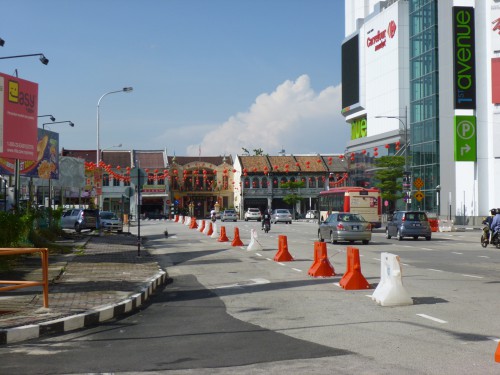 After almost 3 month in Thailand Alfred and I had to leave the country because of the visa stuff. Alfreds Passport is almost full, so we decided to go to Malaysia´s island Penang to Georgetown and get a flight back to Bangkok. This will give us a new 30 day visa for Thailand to manage the set down of the „Exotika 2013“ exhibition and packing of the art works for the transport to Berlin. We heard about Georgetown as a nice chinese influenced town. But what we saw, made us really enthusiastic: a huge area of old houses from 19th to early 20th century in a more or less good shape and a rich amount of different cultural and religious places from all over the world surrounded from skyscrapers and the normal modern architecture like everywhere. Also some very old buildings like a fort, temples and churches. 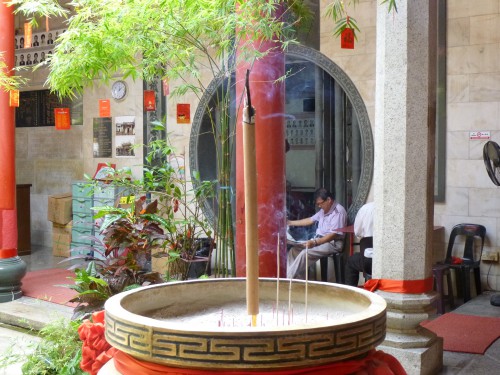 In a Chinese temple 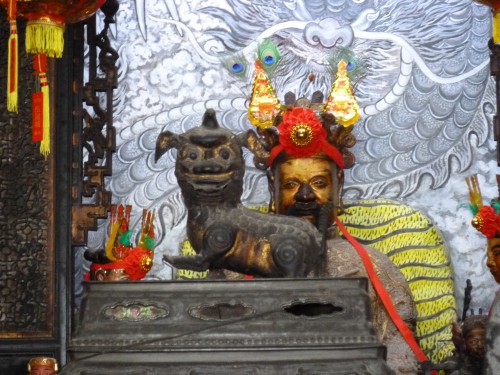 In a Chinese temple

The old town is very mutch influenced from the chinese, and the Chinese New Year happened just few days before. Everywhere you can find the attributes of the celebrations. 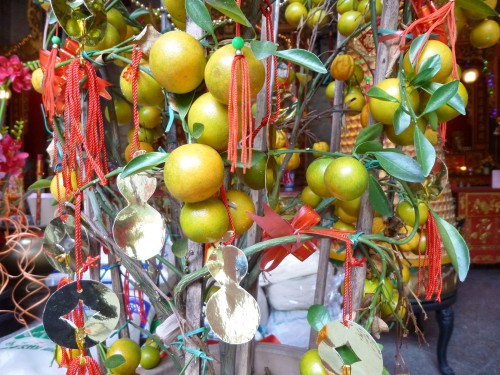 I like very much all the different small altars somewhere in front of the houses. 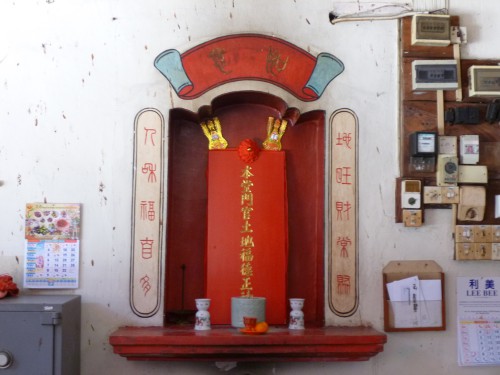 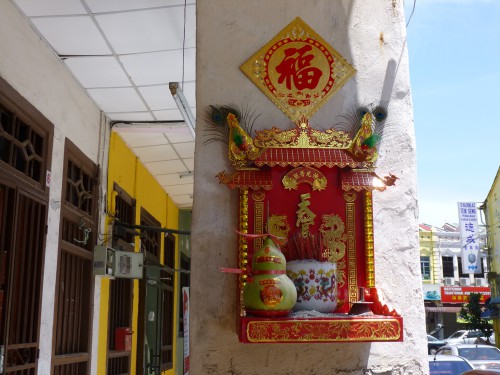 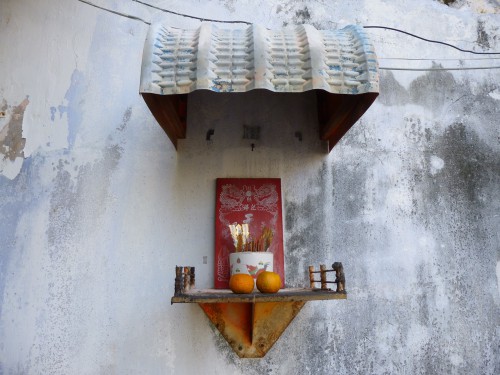 It seems that this old town is more chinese as the former red China, because they didn´t lost so much the variety of different signs, forms and attributes of the chinese culture. Red lanterns are everywhere in the streets and in nearly every old street you will find a temple with man high incense sticks in front, especially during the 2 weeks long New Year celebration. 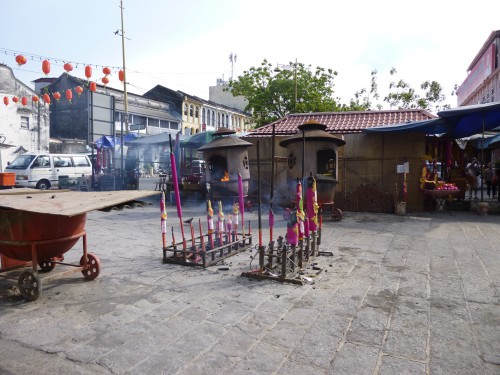 Incense sticks in front of a Chinese temple 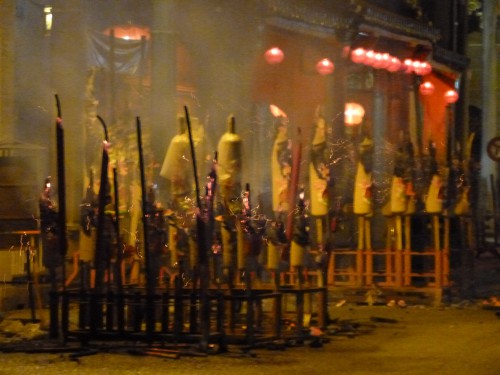 But they have also others: Hindi temples in „Little India“, temples of Buddhism, like from the Tibetan Gelupa´s, Churches and Mosques. 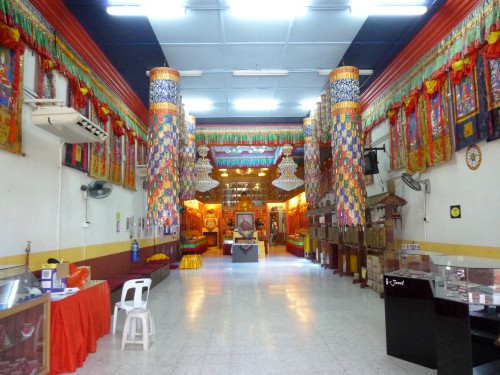 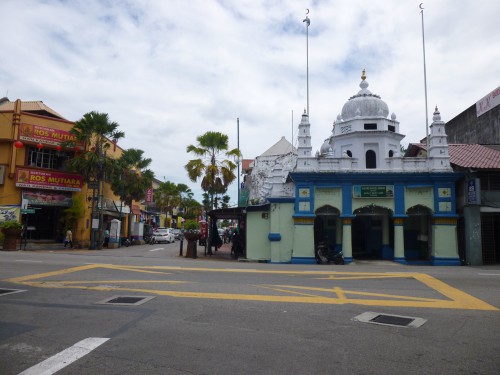 Walking through the streets and explore all this specialities by excident is exciting, also to enjoy the different kind of food. Many of guesthouses and hotels for every budget are in the old cozy buildings and people from all over the world like to stay here, but it is not overcrowded. At the waterline you can watch the modern skyline, the ferry or just enjoy a fresh breeze. And later you can go back through the town, to explore another corner, another kind of food, another tempel….. 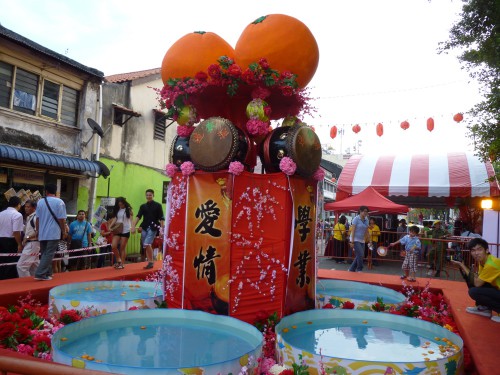 A special ritual with oranges during New Year celebration

There is also a residency place for artists called „cherrycake studios“. We passed by but unfortunately it is closed now, the australian artist and manager Tim Craker went to Australia.

One Response to Georgetown Penang, time machine into old Asia