I must confess, that I totally struggled with my writing on the transits (residencies) of last year. In late august 2012, Christine gave me an account and I was supposed to start reporting immediately. At that time, I was Artist-in-Residence in Kuenstlerhaus Salzamt in Linz (Austria). Some months before I had a Art/Science-Residency by NUS in the Centre of Quantum Technologies Singapore. I promised to create, combine and compare these recent experiences. 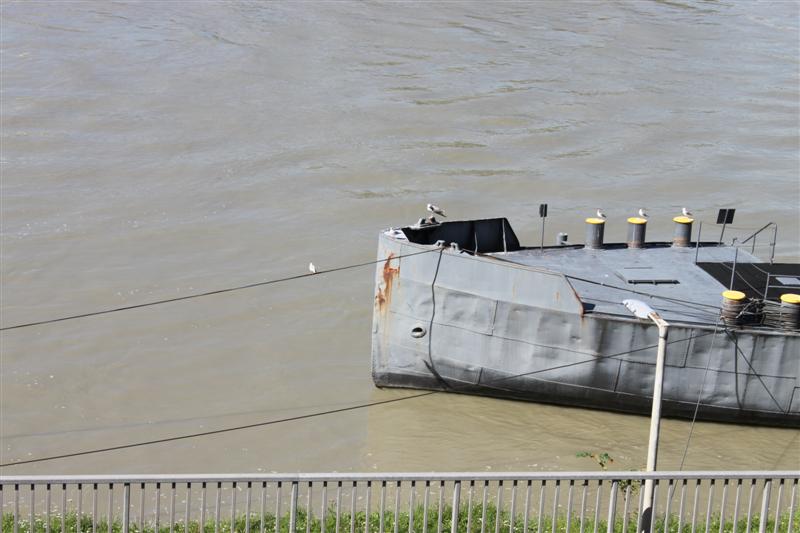 In fact, I had been really motivated, also started some fragments to write on different occurrences, aspects and happenings by that time. Today, I think, I had too much in mind – too many changes and troubles going on, too many and strong to reflect them in a short time: too much tiredness, even to think clearly. A big illustrated confusion. You will soon have the chance to read about the reasons – and I have to say, it hadn’t much to do with a place or country in first place.

Although, it won’t be „real time“ anymore, I think it is worth to reconstruct those experiences and reflect upon them from the distance of past. As it shouldn’t only be a mere mind game, there will be every-day-life-stories included, written from memory, quoted from e-mail-conversations and the text-fragments.

A bit less than one week after an operation, I went on my way to Linz to enter my position as Artist-in-residence in Salzamt. The operation came surprising and the reason had been scaring. One week recovery-time afterwards was prescribed, at minimum. Two more weeks were recommended. Four weeks no carrying, sports or bathing was urged. Due to these facts, I had already postponed my arrival for one week, but I wanted to start my residency: I wouldn’t want to come into brood, alone at home and I really needed the fee, that was paid with my stay. I was already running out of money, this illness now, could easily create a financial problem, too.

Konrad accompanied me, carrying the baggage. It was middle of August and the hottest day of the whole year, when we travelled by train through Germany to Austria. In the Regional-train from Dresden to Nuremberg the air-conditioning went of – somewhere beyond Chemnitz. Outside were almost 40°C and inside the train even more. The combination of the missing air, tropical temperatures and tilt-technology was really odd. Konrad felt bad from it the whole day. We were happy, when changing to ICE in Nuremberg – luckily with a functioning air-conditioning. At about 6 pm we arrived in Linz, took a taxi to Salzamt, where Victor was waiting for us – hand out the keys and some first informations. I got an apartment plus a studio with view over the Danube, hills, city-hall, Ars-Electronica-Center and the massive sound of a frequented highway below me. Finally arrived! 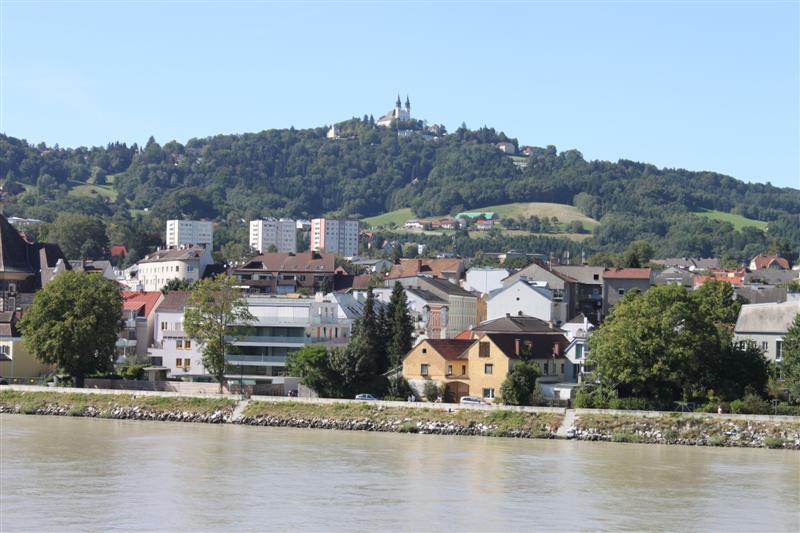 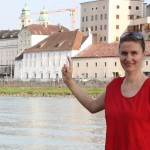 In the next days, Konrad and I spend time slowly walking around – experiencing the city – exploring restaurants, shops and nice places. My favourite one was exposed from the studio-window: a small beach with some trees at the river-side. Many people went swimming there, since it continued to be really hot. The Sahara-heat cooked the European cities. Only the Danube was cold and fresh – from light colour framed by sand, pebbles and osiers.

Slowly over the time, I met the other temporary inhabitants of Salzamt:

Everything is quite international here. When I arrived, I met Jo from Bristol, Eva from Amsterdam and Emily from near Liverool. Later on Rumiko arrived, orgininally from Japan – after her: Selena from Serbia, doing her PhD in Lausanne, Swiss – some days later Eshan, orginally from Iran – the three of them of them currently living in Amsterdam (but didn’t know each other before). Maybe because the curator of the upcoming exhibition is living there – and in Linz, too. She and Eshan are studying “Artistic Research” in Den Haag.

After some days, Konrad left. Literally at the day, something went wrong with my wound: I was bleeding. First I started solving this problem, by ignoring it, hoping that it would disappear by itself, just as it came. I had an appointment with Jo, Emily and Eva to go to an opening at early evening. Somehow, I didn’t gave up this idea to join them, when I was told, that it would be nice and quite walk. We started the tour at the Danube, passing Lentos-Museum. Jo and the others bought beer. Other than usual, I didn’t felt like drinking beer. I felt bleeding again. After some more steps, I said, that I couldn’t join them any more and will instead directly see a hospital. Which came of course as a surprise! So, I told about my operation and the bleeding. They were really concerned and offered to join me. So, we walked a while until I got more scared and decided to take a taxi. We walked along a sign of a taxi-company: I tried to call, but no-one answered – it was after six. Other than in Germany Austrians take their closing times seriously. We asked some dark-skinned men in the neighbourhood about the taxi-enterprise. Some language confusions. Later on, one of the men offered to bring me to the hospital, with his own car. More confusion in my head and heat in my face – then the very intuitive decision to get into the car and go for the direct way to the hospital. I found, that until now, enough people were already involved in my stupid case and I should solve this by myself now. My three colleagues looked a bit worried, when I left. The man droves me some minutes to the next hospital, nicely. I thank him, got off the car and entered the building with an absent mind. The hospital was empty and a woman in white coat informed me, that today they aren’t in charge of ambulance. She calls me a taxi and I was brought to the hospital of “Barmherzige Schwestern” (Merciful sisters). At the reception, I report my story to a stout woman. I am in highest state of confusion: in a vulnerable situation, alone, anxious and in an ultra-catholic hospital: anything else? I feel like a child again. When asked about my confession, I sayed: “None.” But that seem to have no consequences.

I waited about an hour. A German airplane-crew arrives in between – they had an emergency landing and have to perform urgent blood-tests, as they say. Especially the pilot is nervous and in high spirits. Me too, I wouldn’t be surprised, it this would have been a crew of green Martians – I am prepared for everything now.

The medical examination was unspectacular. The doctor stopped the bleeding with an electronic tool, welting the wound. He explains and advises me for further behaviour. I feel relief. Since I live closely enough to return anytime, I am allowed to go home again. The nurse chats with me a bit afterwards. Unlike in Dresden, they seem to have time for their patients. When I returned in Salzamt, I called Konrad to report the news and informed the others, that I am okay and still alive.

In my first week I even saw two hospitals (two, because one didn’t accept patients, this day). It was surprisingly easy to get treatment with my European health insurance card. “Thanks to Europe” as Eva says and “let’s hope that the EU will last”.

When I had breakfast in our living-room the day-after, I met Holger for the first time, and Cindy (both staff of Salzamt). They were already informed about my hospital-adventure. I feel a bit stupid to have had such a starting point. I decided to be really careful in the next days and prescribed myself some house arrest. Emily and Jo brought me food for the weekend. It seemed to be a time, when I was forced to learn more carefully distinguishing important and essential things from others. Forget about all grants, prizes, projects and applications: one can live without working, but not work without living. 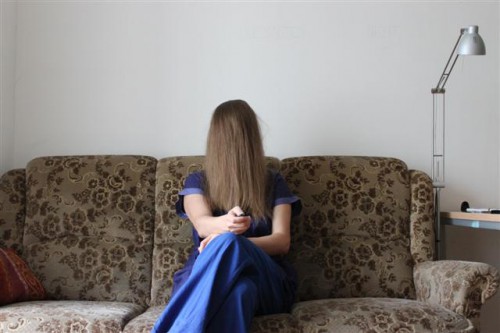 Born 1979 in Gera (GDR). Studied Sculpture and Sculptural and Spacial Concepts at the Art-School Dresden (Hochschule für Bildende Künste) -finished with Degree "Diplom" in 2005 - since 2007 she became “Meisterschülerin” of Prof. Martin Honert. Her artistic works bases on a conceptual approach and involves projects within Community Arts, Public Art, Sound Art and interaction with scientific institutes and topics. She had been teaching in artistic faculties at Universities of Wuppertal and Dresden. Since 2003 she partially organises exhibitions, symposia and projects with other activists.
View all posts by Grit Ruhland »