We have left Fogo on Friday for four more days in St. John’s before we will be heading back to Europe. It’s funny: I talk about going to Europe and not to Germany – probably because people here often see Europe as a whole – as the Old World. I wish we Europeans could perceive Europe more as a unity as well… it’s easier from afar. 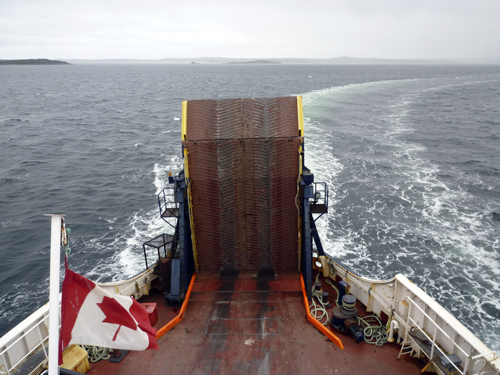 I miss our little white house in Sandy Cove and the freedom it offered, standing there by its own over the Cove – it felt a bit like paradise…
And we really became attached to the people there as well, some were good neighbours and others were just about to become real friends. I hope to stay in contact at least with a few of them – and go and see them again not too far from now. 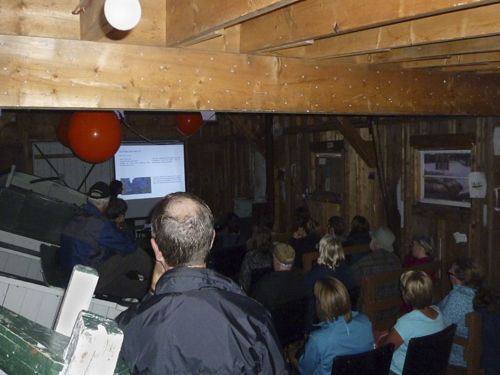 artist talk at the slipway in Tilting

A few days before our departure I gave a little presentation in the boathouse down at the slipway. It was a nice crowd and I really enjoyed talking about what I was busy with over the last weeks. Afterwards we sat together and chatted and sang – when they urged me to sing some German song the only one that came to my mind was the one about the poor taylor that travels through the Lüneburger Heide and gets killed by a pub owner and his wife… weird song, and my voice is of the kind that people usually turn up the radio when I start singing. Anyway, it was still appreciated, and when we left the boathouse to go home that night, there they were over the Cove: the Northern Lights! I never expected to see them this far south (Fogo is on about the same latitude as Dortmund) and at this time of the year. That was a wonderful surprise and a beautiful gift – I had so much longed to see them last winter in Norway… 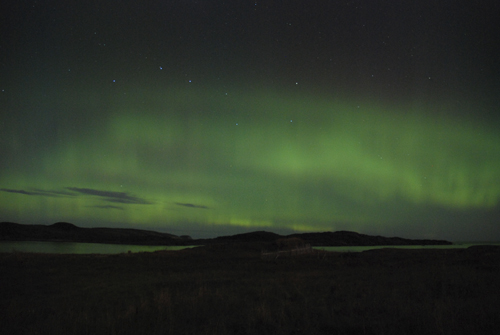 St. John’s – almost a 12 hour journey away from Tilting or Sandy Cove – is a nice town, and it is THE town in Newfoundland: there is no other. The townies have a relaxed mentality of living at the center of the universe. And it’s true, the rest of the world seems far away, unreal from over here. And St. John’s music scene is exceptional: we saw (and heard!) the Black Bags and the Pathological Lovers at the Ship Inn last night – unexpected, innovative and complex sounds – and loud! My ears are still ringing. 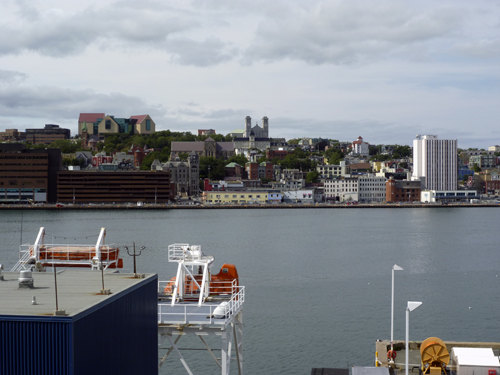 St. John's seen from the south side of the harbour

I will give another talk and presentation at Memorial University on Tuesday. It’s organized by ISER, the Institute for Social and Economic Research who supports my recent Newfoundland related work with a research grant. Besides TRACS (Tilting recreation and Cultural Society) who invited me to Fogo, it is thanks to them that I could come over this year to collect the footage necessary to complete the works initiated in Norway and Ireland.

And later that day we will board the plane for London – if everything works out fine; I heard someone talking about a hurricane coming towards Nova Scotia.