Back home after a long exciting journey

After a long period of silence I would like to continue this blog. I just came back from a long journey which includes preparations for our next project EXOTIKA 2013 in Thailand and also a 2 month stay at Sulawesi in Indonesia. Most of the time in Indonesia we have been in areas without internet and  mobile phone. 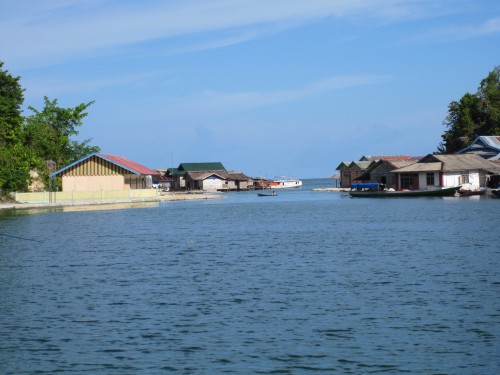 natural harbor, somewhere on the journey

I arrived Bangkok in January 2012. .It was high season, many guesthouses were booked out.  Amazing, how fast normality comes back in Thailand after the big flood at the end of  2011. And „Döner“ (German) or “Kebab” arrived Bangkok, it is the brand new fast food in the tourist areas. 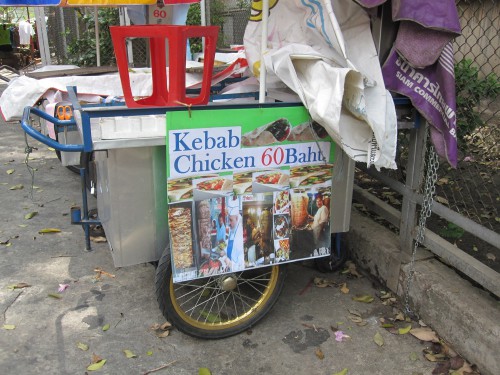 Immediately we had meetings with some friends. We were very afraid about the effects of the flood, because some of our friends are living or working in the flood areas. But everything was fine and only some sand bags told about the terrible time at the end of last year. The invisible side effects were not good for many people: universities were closed and teachers (often not permanent employers) could not earn money; and  money for art projects were cancelled. And the life for everybody became more expensive. We had some talks about our upcoming exhibition project EXOTIKA 2013 and a very nice party at Chinese New Year. After a meeting in the German Embassy we went to Sulawesi in Indonesia. 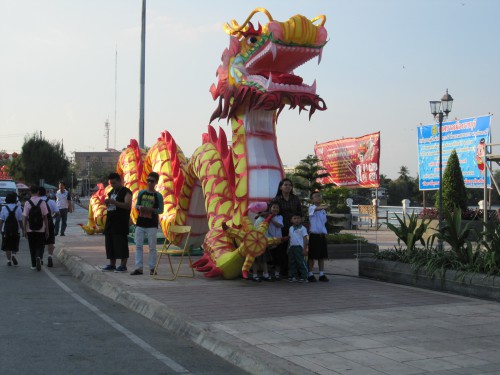 At Chinese New Year in Ratchaburi

After 7 years traveling with projects this was my first trip  without a project! I called it study and research journey in a foreign culture, because we (Alfred and I) didn´t know much about Indonesia. We arrived in Makassar at the end of January. Makassar is not a town to welcome foreign people. It is loud, ugly and expensive, no space to walk and I felt not save. So we stayed very short and took a bus to central Sulawesi immediately. 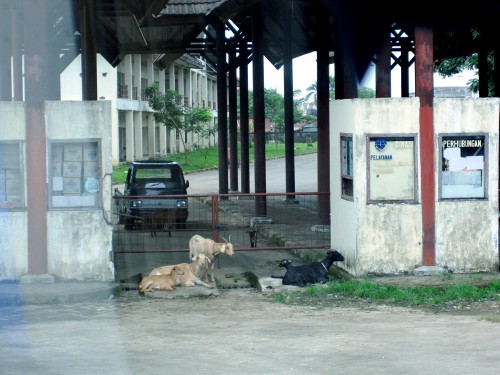 Makassar - at the bus station 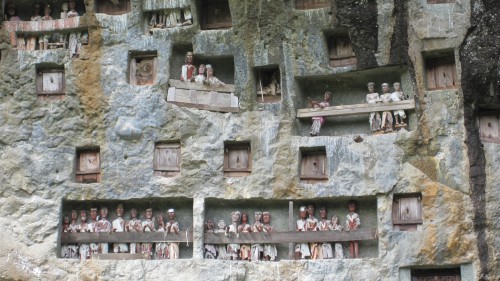 Tao Tao sculptures near the graves

This area is for tourists well developed, having visitors from all over the world watching local ceremonies, architecture and graves. The Toraja people  have a special relationship with  the dead. They take a lot of effort and costs to their dead relatives. First they keep the dead body in the house (special prepaired) and they save money, sometimes over years, for the funeral. It is an old animistic believe that the dead person will live further in another sphere and need as much as possible food and stuff for daily life. At the funeral, people offer many animals, make all kind of  rituals, and it is also important to have many guests. Many guides bring tourists to this funerals, but I didn´t want to go. I enjoyed to visit the graves instead, famous for the Tao Tao, the wooden sculptures of the ancestors, which are looking down from balconies to the rice fields. 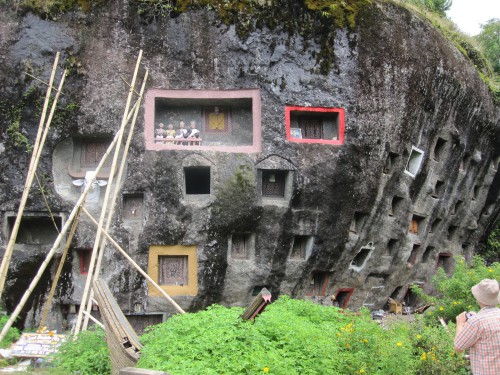 Also famous are the special forms of the roofs in Toraja land, they look like boats. 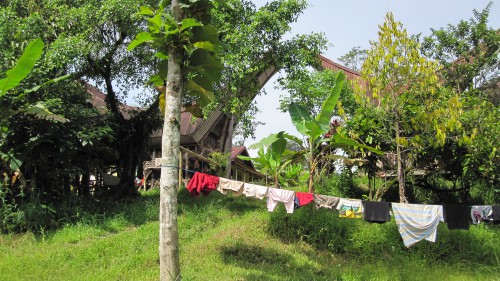 special roofs in the villages of Toraja land

We had some nice walks through the terassed rice fields, passing cacao tree plantations (I am a chocolate lover, but never saw the cacao beans in real before), houses and graves. 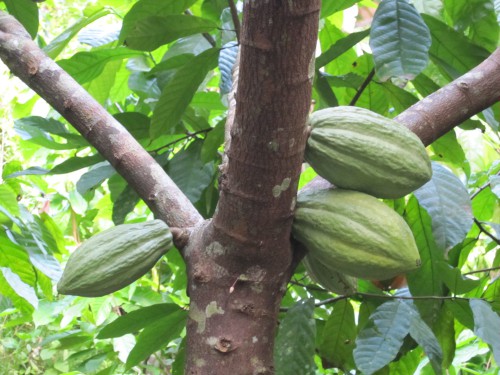 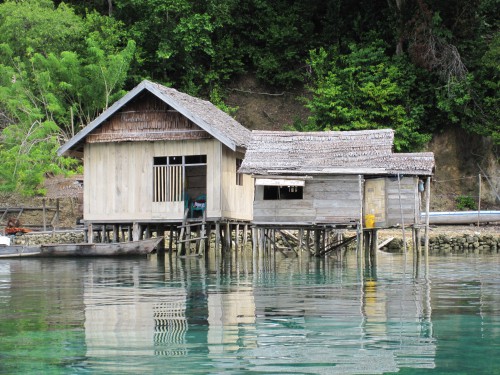 Many sea gypsies are living here, settled down in villages under the pressure of the gouvernment. Most of them live in stilt houses. There is also a jellyfish lake (like in Palau) with this rare species of jellyfishes in an isolated area. But only few tourists go there and it is an amazing experience to swim with the jellyfishes, and also watch the beautiful corals in this area. 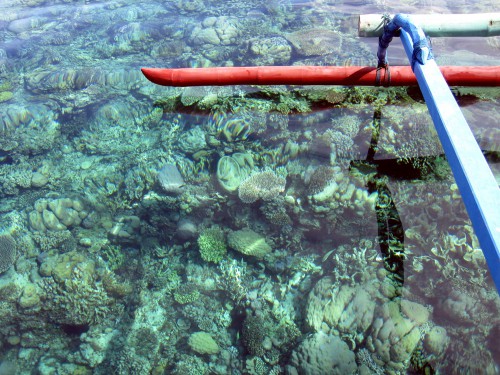 After island hopping in Togian Islands  (well developed for tourists) we went to Una Una Island by public boat. Una Una is a volcanic island,  the vulcano erupted in 1983. All people were evacuated before, but lost nearly all belongings. For many years it was forbidden to families to live permanently on the island. Now it started again, and we felt like in a time machine. You can see the ruins of old houses, talking from old rich times, some are used for new settlings, some are empty and more or less destroyed. 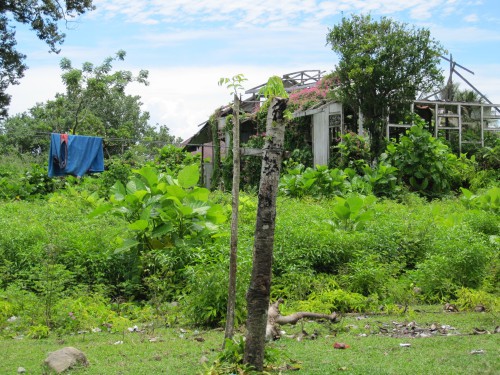 a ruin on Una Una

Luckily we met Witja from Jakarta, a young and well educated guy who was looking for his ancesters land he inherited. He told us a lot of insider informations about the island. So the contrast between Una Una people with their very simple lifes (farming and fishing) and a rich megacity person was amazing for me and showed the big differences in Indonesia. He earns his money with internet business, Una Una is somehow the end of the world and you cannot get connection for www and mobile phone.  On this island, electric power is made by generators, only for a few hours in the evening, fresh water often has to be transported by people. 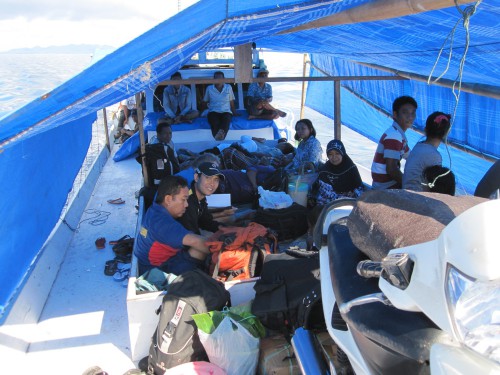 We stayed with a nice family, they hosted us and cooked for us.  The people here are very friendly and open minded, and take care of tourists in a nice way. In the time we stayed there, it came out that the people in that village were robbed from a big wood company, which payed only a few procent of the amount they promised to pay. But nobody had a contract, and i´m not sure if people can read and write… 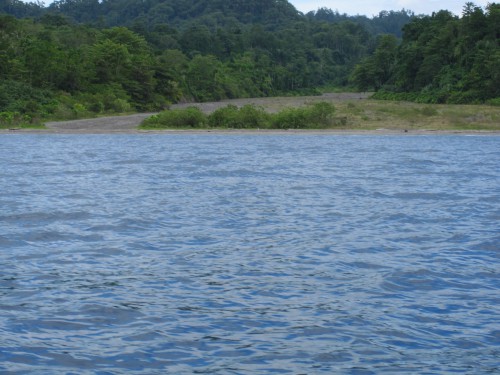 We saw the lava streams and following effects of the volcano at a round trip by boat, and had a glimps of imagination about this special power of nature. The volcano itself looked like a green hill, not really serious or dangerous. 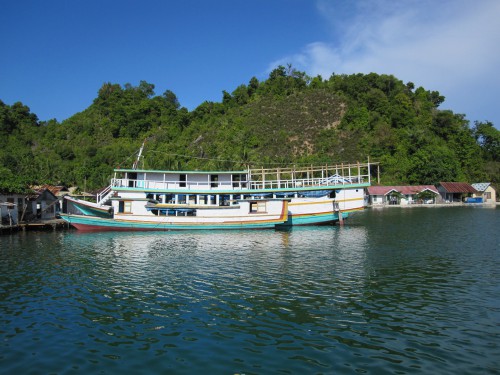 ferries between the islands

Banggai Islands: the Banggai Kardinal perch, stilt houses in the middle of the sea and the wide of the ocean near aequator with beautiful cloud formations. 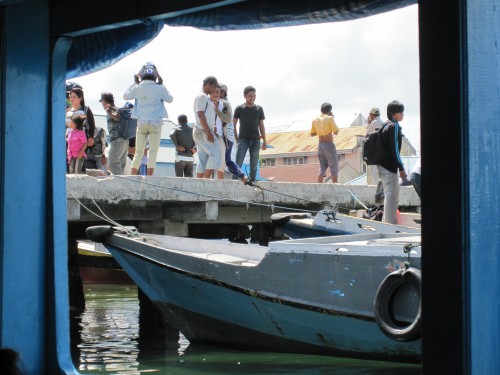 during a ferry trip

With only few words in Indonesien language we started the adventure trip to Banggai Islands, a non developed area for tourists. It became one of the best experiences I ever had. 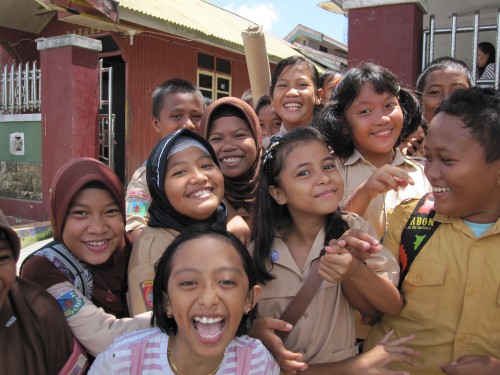 We stayed in a small village on a big island in a very nice family, joined the village life. It was very impressive for me to look at the social structures of the village and the big families. They take care of each other. The life is slow and simple, but very peacefull and balanced. People have less, but it seems they are happy. It is a feeling of safety I felt. Nobody wastes food, they keep the left overs for the animals. Children are playing around and have fun, with nearly nothing. Maybe it is a stupid klischee to say, a more simple life makes more happy, but I think, we have start to think about serious social structures and solidarity again in our developed and over feeded part of the world. 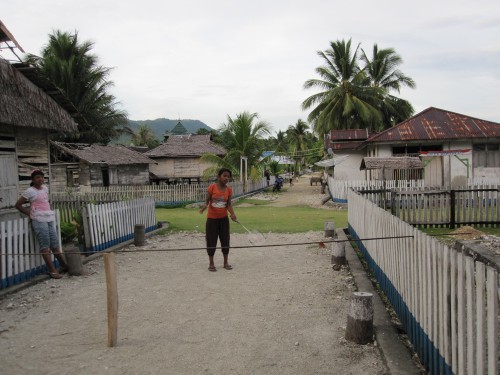 We also watched the small Banggai Kardinal perch while snorkeling, you can find this fish only in Banggai area and it is one of the most beautiful fishes I have ever seen. 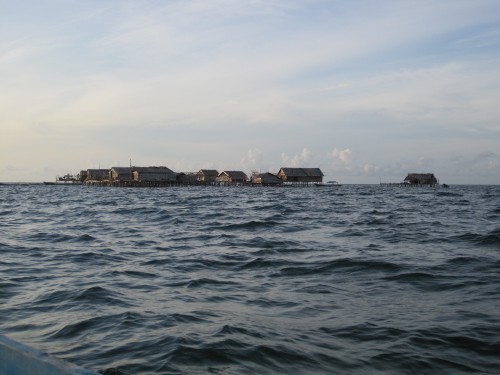 stilt village in the middle of the sea

And for 3 days we went out to live with Banggai fisherman in stilt houses in the middle of the sea. They built the houses in an atoll, half an hour boat ride from the next island (they take the fresh water there) and very far away from the village we stayed.  The small village, connected with stages, is a place for fish: fresh catched fish, half dried fish, dried fish, fish for lunch and dinner, octopus too. 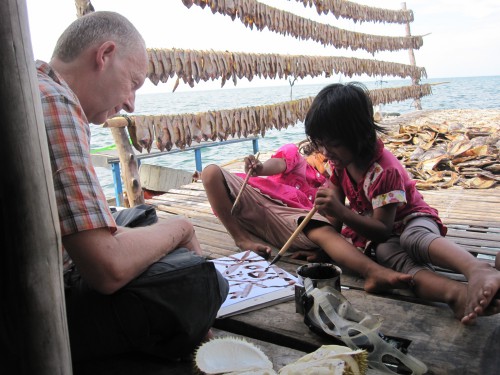 Alfred Banze makes drawings with the children (with octopus ink)

We had a lot of fresh air, no moskitos, no flies, no cockroaches, no mice. The day started with the first daylight and ended not very late. People there love music. In the evening we had nice Banggai songs as good night songs and at a stormy afternoon a funny music session with more than 10 people. 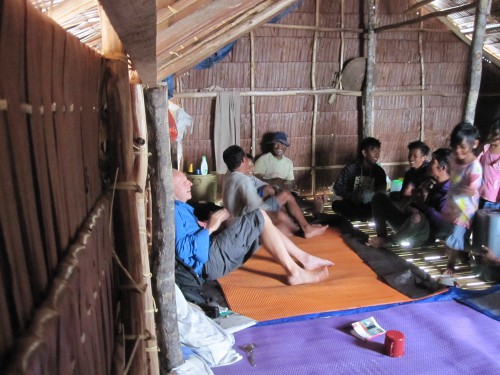 music session during a stormy day

Of course, we realized also our richness, because we were asked again and again for our snorkeling masks. Equipment like this is very expensive (and they earn not much with all the fish) and every fisherman likes to get it for fishing. (If you, the reader, has a mask laying around, please go in contact with me and send it, because I want to collect and send some to this people.) 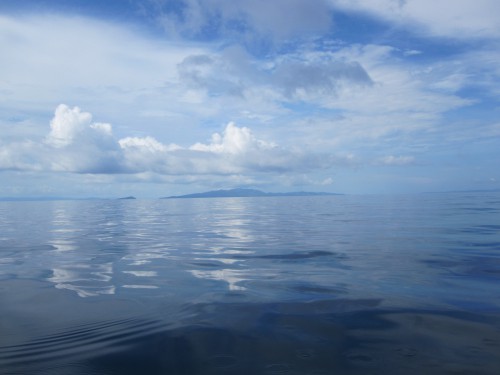 clouds near the equator

I will never forget this nice people and also the experience to watch the endless wide ocean with the great  moving clouds and the changing lights, waves and winds in my life. 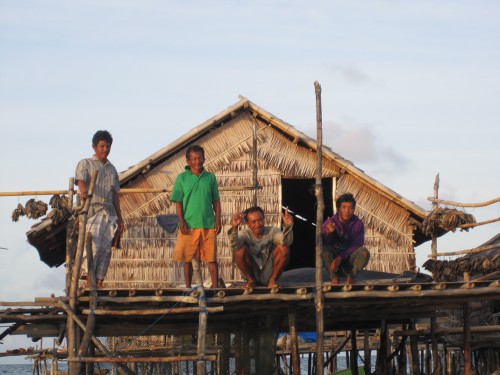 I think, it is like everywhere in the world. We heard about many problems: corruption and cheating, crime and the environment problems (lots of plastic waste in the ocean, dynamit fishing), destroyed nature by farming, transmigration and mining,… and very clever and intellegent children have no chance to get a serious education. 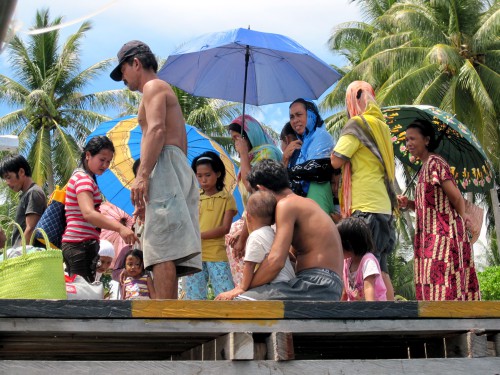 somewhere on the way

But I have to mention one fact again and again: I never felt racism against us “rich” foreigners, only attention in a funny way. “Hallo Mister!” nearly all people called us when they met us on the street. And people love to be photographed. 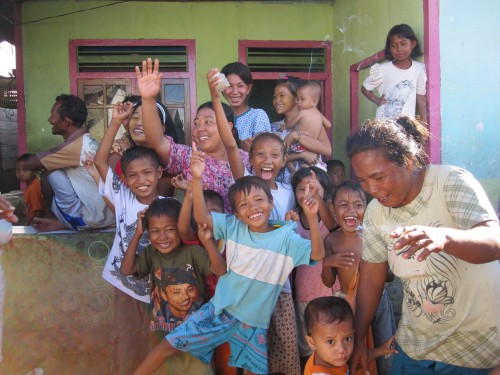 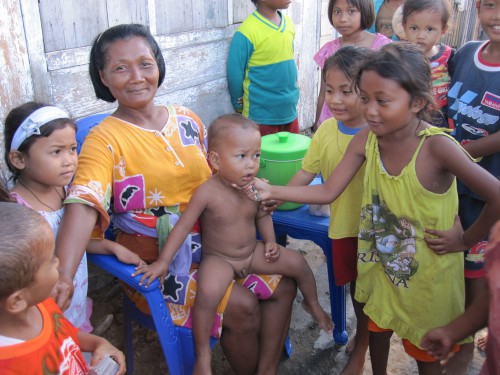 ...proud to be photographed

Back in Bangkok again: after a meeting with Amrit Chusuwan and Sakarin Krue On it is arranged: we will have  the international exhibition project EXOTIKA 2013 in January 2013 at the Sanam Chandra Art Gallery in Nakon Pathom.

That’s a short description af the last 3 month of my life. I´m full of impressions and look forward to start my creative work for EXOTIKA 2013.