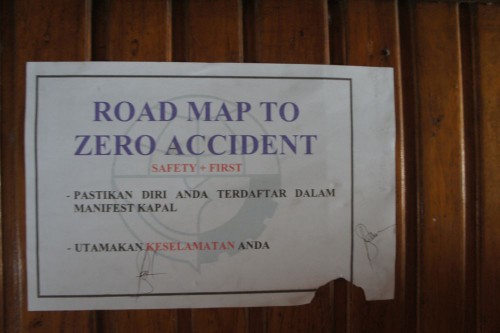 13. 2. 2012 Una Una Islands
We made it onto the unofficial island. Here is no accommodation for tourists, and the people here are officially not allowed to stay permanently. Una Una was evacuated in 1983, shortly before a volcanic eruption. Luckely, the temporary houses don´t look different than the normal houses on other islands around, only the representative buildings of local representations of the government, banks, companies etc. are missing, instead there are still a lot of old buildings, dutch stile, half ruined, half in use. And slowly, these beautiful old stone house, with a very photogenic patina are renovated again. Some motorbikes, tractors for farming and wood logging, some generators, that´s all of modernity you can find on this big island. Wica comes from Yakarta, on Una Una he wants to check the timber wood plantations of his family. And maybe later, that´s his dream, he will built a small hotel. Wica rented a boat, to make a tour around the island, 36 km, and we went with him. Stop in a small village in the west, he is meeting an oncle of his mother. They talk for hours, and I don´t understand a word. But I enjoy that, listing to  a successful communication, only listening to sound. That gives me a “cozy” feeling, like when i was a child, and my parents visited uncles and aunties, having coffee and cake and some liquors after that, and i didn´t understand what they were talking. But the only problem, then and also now: getting very very tired from it.

Sitting there, sweating and saving the cake from the attacks of millions of flies, i think again about the H-O-P-E installation. All these flies on the cake, like the people on the Per Kroeg wall painting. I think, i should take photos of street scenes in the locations i meet the projects participants, panorama photos with a lot of details, and without any focus. But what to do about the sound? The videoclips have sound, some even music. But in between, the project of the painting has no sound. What to do? Related to the idea of the x-ray like spotlight searching though the painting, the moving of the spotlight could also “morph” through different to the visual details related sounds and sound patterns. Reading Tom Robbins book “Pan Aroma” i am very impressed about his storytelling. He really takes his time to built up an atmosphere before he continues to tell another chapter of the story. I should learn from that. Take my time for athmosperes.

14. 2. 2012 Una Una Island
Rain, rain, and more rain.  A river appeared in the middle of the village. A brown soup runs into the sea, transporting coconuts and waste, starting a hopeful travel to overseas. One day it will block the filter systems of the just finished new protection walls at the coasts of Europe. Another mean attack against our sensitive democracy. Rain, rain, rain. It is raining empty packages of potato chips and instant soups by Nestlé and Unilever. But who is interested in that, here as there in Europe. Emerging markets, countries, where you can make a fast money, as more bad the situation is, as higher is the profit.

It seemed to be a very profitable and fast business, when the merchant sold this old ruined building at the harbor of  Mastricht to an unknown Lord from Transilvania. But how wrong he was, he called the ghosts, he brought the death into the town. A death ship with millions of rats drove into the town, to see like that in Werner Herzogs film “Nosferatu”. The houses on this island, as in many other areas in Indonesia are in dutch style, beautiful stone houses, ruined rests of a lost time. How many Dutch have lived in Indonesia, in their longing far away “island india parades”, far away from their narrow own country. A couple in the clothes of merchants of the 18th century is sitting at the beach of a northern coast line, watching on a big sailing boat, heading to the overseas colonies, to see on a painting by a dutch painter, i can´t remember the name.