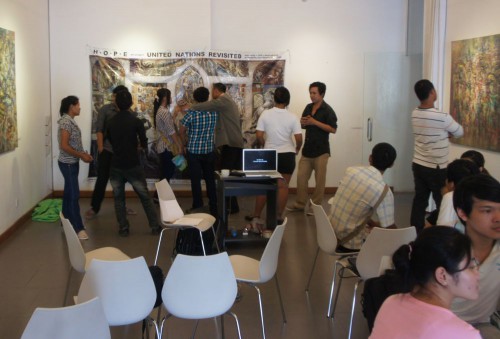 15. 1. 2012, Phnom Penh
Questions for a H-O-P-E workshop at Metahouse Phnom Penh,
with young filmmakers from Cambodia:

After this, the UN builded up a network of organizations working on all kinds of issues, like health care, education etc. Following an analyse of the Heinrich-Böll-Stiftung, Cambodia government is today, after 20 years of UN international Aid actives, not able to direct their country without the help from outside. 50% of the national budget and 80% their investments comes from international Aid programs. Main problem here is the corruption. The practice, how the government overhands national land to private owners is criminal. Today, tourism is the most important business factor, but only 5 % of the inmost stays in Cambodia, the rest gets transferred to the outside. The Heinrich-Böll-Stiftung criticized the UN´s business strategies, the money was given to centralistic, supporting in this way a centralistic and corrupt system, instead of helping to built up local and decentralistic structures.

In Cambodia, you have to be corrupt, to survive, teachers, police, any people working for the government, have to extent their very little sellary by corruption. Most of the big companies being to foreigners, for example 8 of 10 textile factories. Peter Köpping, former director of Konrad Adenauer Stiftung Cambodia critices: the UN´s strategy of founding was mutch to centralistic. The first national election took place in 1993, the first local elections, for village heads, mayor etc. was in 2002. And they did not support education enough in a good way.