Danger and fun in Kinshasa 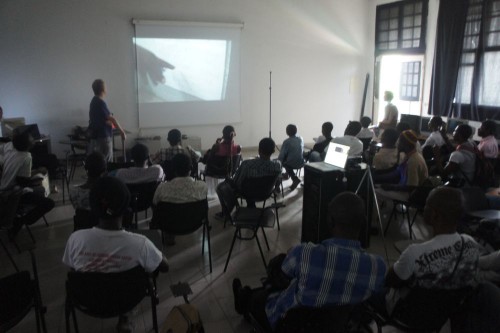 8. 12. 11, Kinshasa
Still in isolation at the art academy campus. Yesterday evening, the elections results where published. The last president, Mr. Kambila won again. But now is the question: will it be quiet, or are there more riots on the streets? It rained all the night, that´s good. Because, on such a weather, the students will come later,more time for me to prepare, and, the rebellion will be canceled. Because, a rebellion would mean deaths. And after the agressive atmosphere on the streets in the last days, it could have been many deaths. Gently the rain falls on the town, a sentence in a song by the Doors, i like so mutch.

Again and again the students in my workshop are asking in their videos: If something like this happens, where is the UN? Why do they allways come to late? The students recocnize a repeating pattern, and they interpretate it like this: The UN is not stoping any conlict, because in one or another form, they are good for them. Outside i hear some explosions again,and this are no fireworks. And where is Mama Poulo, she wanted to get some bread for me… 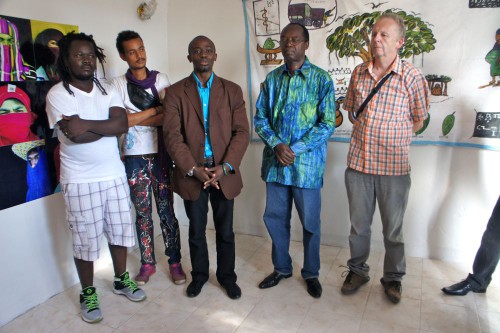 Some days later it becomes more quiet in the town. Now it is for shure: Mr Kambila stays the president of R.D. Congo. So, for me it is time to prepare the exhibition THE BANYAN TREE – ART + ENCOUNTERS  at Kinart Studio, the new art place in Kinshasa, founded by Vitshois Mwilambwe Bondo. I know Vitshois since 2005, when i met him at the Boulev`Art Festival in Cotonou in Benin, organized by the Benin artist Dominique Zinkpé. Since then both were part of the Banyan Project www.banyan-project.de Kinart Studio is outside of Kinshasa, i a villagelike squat near the Congo river. We have to paint the house first, make shire, the electricity is working, than i can beige to set uo the exhibition. Videos, paintings, photos, objects by 30 artists from 20 countries.The opening is well visited, even the director of the Art Academy is coming, also many young artists. A german TV team appears, they produce a program: Art production in crisis areas worldwide. They have 3 days time for the Congo. They make a long interview with Vitshois, great!

Final presentation of the video results of the H-O-P-E workshop at the art academy. Around 50 students come, also a few teachers. The presentation is at 3 in the afternoon, and at this time of the day, some teachers like to have their everyday cold beer in the shadow, also an academic career. The video show is fun. Everybody presents the video themselves, the two music clips are presented with live-singing / rapping. Applause!