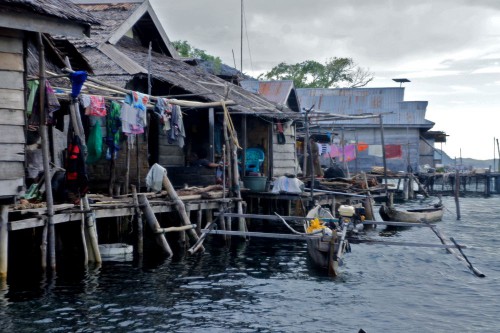 12. 2. 2012 Bolilanga Island
Not far from here away, I can see the small Bau village Katupat. On the other side, far outside in the open sea, maybe 10 km away, I can see one single house on pillars, it is built to protect the fishermen, when a storm is coming. This house is one of last of its kind, it reminds to the earlier times, when traveling by boat was slow, before the invention of motor boats. People lived on their house boats, had temporary villages built on the riffs in the open sea. In that times, every island was its own country, with its own village head, king, sultan or president, and with its own language or at least an own dialect. Visiting each other was not easy, and the exchange of presents was a central ritual for keeping peace. Newyear, the young for everything at the Malenge Lestari Guesthouse, told me, as a you man he was working as a thuna fisher, and one evening they were ankering in front of the island of Taliabu, east of Sulawesi, while a local party with beautiful music and dancing was going on. They thought, let´s check it out, let´s go dancing. But a group of young men appeared, one with a knife, and Newyears friend was hurt badly, and they had to run back to the boat, as fast as they could. In that time, you had not to move far to cross borders.