On February 8th I made a trip to Fedje, an Island north of Hernar. Although you can see Fedje’s light house from Hernar, the route there by bus is in the opposite direction – it takes about 2 hours and I had to change bus 3 times, being the only passenger in the last one that brought me from Austrheim kirke to Sævrøy båtkai from where I took a really large car ferry to the rather small island – which is larger than Hernar though and has more than 500 permanent inhabitants compared to Hernar’s 8. 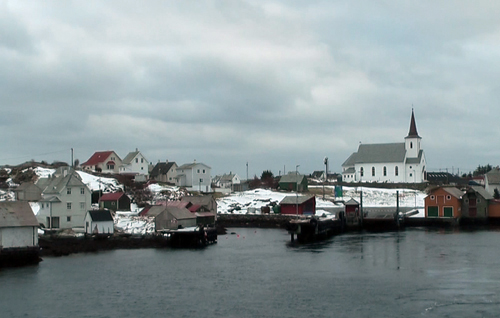 I was going there because I had come across the fact that a German submarine from WW II lies aground only about 3km off Fedje. It had left the Bergen submarine station Bruno on February 7th but due to a malfunction had to turn around and was trying to get back to Bergen when it was hit and split in two pieces by a torpedo from a British submarine on Februray 9th, 1945. – I only noticed the date concurrence of my visit when, back home, I looked at the video footage I had taken, wondering if it would reflect the original weather conditions of the events it is concerned with. Well, obviously it does. 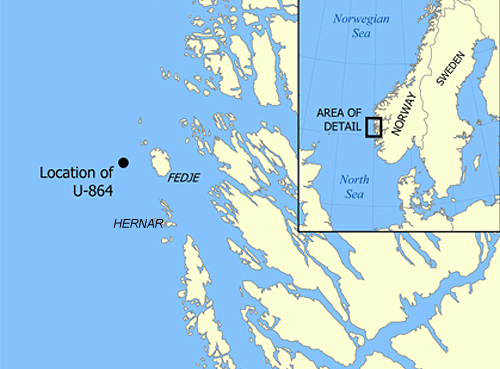 Location of U-864 off Fedje, image by Norman Einstein

The reason, why the tragedy of U-864 is of special interest today – after all the list of sunken WW II ships and submarines along Norway’s coast and in its fjordst is long – is that besides the 73 passengers it had on board, it was carrying a freight of approx. 70 tons of mercury to be used in bomb manufacturing in Japan. Today, about 4 kg of mercury per year are leaking from the rusting steel containers into the ocean. Since the submarine was re-discovered in 2003 there has been much discussion going on if U-864 should be heaved or covered by a concrete sarkophagus and the government has already made decisions favouring one as well as the other version – but nothing has happened to the present day.

I have been talking to one of the scientists of the Institute for Marine Research that was in charge of supervising the monitoring on-site and advising the government. He said that the mercury in its metallic form cannot be absorbed by living organisms. It has to be transformed into an organic form by bacteria first. And this takes obviously a long time. How long, I don’t know, but obviously within that time frame the mercury will most probably already have spread out so far that a punctual contamination of the marine fauna and flora near Fedje is not to be expected. But is that a reason to sit and watch the mercury spread out over the seabed? – Or to order yet another report before taking any measurements? Maybe, Germany should assist Norway in the immense costs that both alternatives (the heaving being the even more costly of the two) would bear. 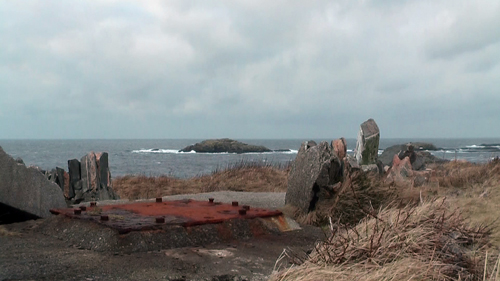