Reality check in Athens: – On bus X95 from Syntagma Square to the Athens airport, January 28, 2012 / – Still no working permits have been issued to 300 immigrant workers who won the 44 days long hunger strike in Greece one year ago. 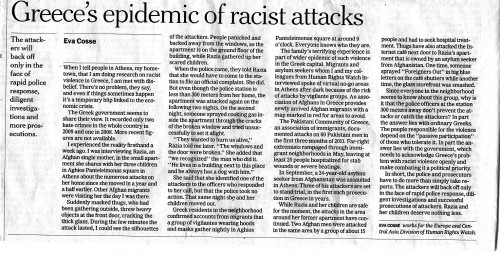 After a cup of caffee, toast and nice morning talk, I said good-by to Marina Fokidis (free lance curator, who kindly let me stay at her place for past 3 days), and to her housewife Lolita. I walked couple of streets downhill and took a short taxi ride to Syntagma Square. There I bought 5 Euro ticket, validated it, and set on the bus number X95 to drive to the airport. The same as on the way from the airport- since the bus was not full – I’ve put my two small bags – one with computer and the other with camera equipment on the sit next to me. A guy sitting in front of me has already done the same.

I had a window sit in the first part of the bus, close to the second door. All passengers were entering via the first, front door. Few stops later a man got in, came to me and lectured me that it is not allowed having bags on the sit, since the sits are for passengers. I said sure, and tried to explain that there is still plenty of free sits around, other vice I would remove my bags for sure. He sat down shortly to one of free sits near by, but soon after stood up and went to the man that was standing (next to another free sit and the suitcases stand) and told him something. This second man came to me shouting that I shouldn’t have my bag blocking the sit, and was asking me where I was from. I said that they can have the sit next to me (while putting one of small bags on my lap, and I asked him not to should on me and said that he doesn’t have right to ask me where I was from.

He took aggressively my other small suitcase where camera was and through it between other bags few meter away. The first man set down next to me immediately while the aggressive one who was still standing, was still insisting on: – were I was from- claming that he was “FROM HERE!”
I said that he is shouting on me because I am a woman and a foreigner and that he does not have a right to know where I was from. He was still shouting. A women sitting near by said that I should behave since I am a foreigner and since I know I was not right. I said that that was not true and that I am aggressed here because I am women and a foreigner and asked why they for example didn’t bother talking to the man in front of me who as well booked one sit next to him with language. In the meantime two middle age women came in the bus and took some free sits at the very front of the bus. I looked at the back. Almost all sits there were free, with the exception of two persons of colour sitting at the back of the bus. So I started to regret I’ve chosen such an exposed place in the first part of the bus, but was inconvenient to move at this point since the first man was sitting next to me actually pressing me with his elbows while reading Greek newspapers.

I tried to explain to the person next to me that his elbows were not respecting my space and that I felt uncomfortable while he was pushing me without noticing. He (-the provocateur) said loudly: “I am sorry that you think that I don’t like women!”
Then the aggressive man was loudly discussing with him something in Greek. So the entire bus could here something bad about me. No one interrupted this conversation. But on women’s faces in the first part of the bus I could see that they were not approving what they were saying. I stayed quiet.

Some time later the aggressive man who was still standing in the middle of the first part of the bus finally left the bus. The man next to me (the provocateur) asked me immediately – ” Where you from?”
I said that he has no right to ask me that, since it is discriminative in this context. They are not authority on this bus, and I did not committed crime. We are all passengers who bought our tickets and we have equal rights and should respect each other, wherever we are coming from.
He said he didn’t wonted to spoil my vacation and I should forget what has happened. He then said that the other man (the aggressive one who left before) said that I was from England, but he believed that I was not form England. So he still wonted to know where I was from. I insisted on not letting him know where I was from and said I was not on vacation. I came for work here in relation to human rights issues and that I was badly aggressed on this bus.
He said the other guy was not aggressive- “that’s to hard word”….
I said that I was aware that it’s my right that no one in the world, nowhere in the world has right to shout on me.
Soon I wished him good day and he wished me good trip and left the bus.

Soon after I started to cry. We arrived to the airport and two girls, visibly moved, came to me apologising for this accident saying how sorry they were for what has happened and how said that the man was so aggressive.
“We are not all Greeks like that”- those girls were repeating.
I thanked them and said that I know.
One of the young women said she would say something before but she was afraid that the situation could escalate even worst if she would say something since the man was so aggressive. She claimed, she would react anyway if he was even more harassing me.
“You shouldn’t cry. You can’t travel like that.”- They said.
“It’s all right if I let emotions of stress out for a moment”- I said.
“I came here because of some racist issues”… – I wonted to explain…
“Yes the guy was racist”… – they said.

The day earlier, on January 26, while I was standing in a windy cold place in Athens near ministry of commerce with immigrants who took part in 44 days long hunger strike one year ago, and while I was filming statements from lawyer, representatives of Migrants Forum Kreta and some of the former 300 hunger strikers them self’s, the protest slowly finished – and I was told that “We have to leave immediately” from there, because of fascists and police…

While I was in Athens I have attended as well press conference, on January 25, 2012 – where the immigrants stated that they are continuing struggle for dignity and equal rights of immigrant workers and announced that they are going to talk with the minister of interiors, in order to find out why the 300 hunger strikers still did not receive their working permits that have been promised to them one year ago…

Those days I’ve seen many homeless people on the streets and have heard of numerous racist attacks. It seems to me after this visit and the previous visit in 2011, and after talking to many relevant people, that Greek government and police have no vision and no strategy at all in dealing with immigrants and with racisms of all kinds that immigrants are heavily exposed to on different levels…

I´m independent interdisciplinary artist based in Berlin, and currently a fellow at the GS of UDK, University of Arts Berlin. I was born in 1972 in Yugoslavia (Serbia), and have studied art in Belgrade and Nantes. I include myself as a character in performances and use diverse media in my artistic researches, thereby examining gender issues, economical and social configurations, and relations of power. I work predominantly from the migrant woman’s perspective, while political positioning, humour and integration of the recipient define the approach in my work. I presented my work in a large number of important international exhibitions and at performance venues and festivals, and have given lectures at universities and academic conferences around Europe and in Americas. My last solo exhibitions were: "Tanja Ostojic: Body, Politics, Agency.." at Škuc Gallery, Ljubljana, Slovenia, (2012) and "Integration Impossible? Politics of Migration in the Artwork of Tanja Ostojić" in Kunstpavillon, Innsbruck, Austria. My work is being exhibited currently at "ECONOMY" CCA Glasgow and "The Present and Presence", MSUM, Museum of Contemporary Art, Ljubljana. It was recently show as well at: MMCA Thessalonica, Greece; "Decolonial Aesthetics" at Fredric Jemson Gallery and Nasher Museum of Art, Duke University Durham NC USA; "Gateways: Art and Networked Culture" at the Kumu Art Museum, Tallinn, Estonia and "Call the Wittnes" Roma Pavilion, Venice Biennale 2011. I published a book entitled "Integration Impossible? The Politics of Migration in the Artwork of Tanja Ostojić", M. Gržinić and T. Ostojić eds., argobooks, Berlin 2009. http://www.van.at/see/tanja/ http://gs.udk-berlin.de/stipendiaten/tanja-ostojic/
View all posts by Tanja Ostojic »