Norway: From Bergen to Vinland and back

I think I am getting used to my huge studio with that awesome view over the bay and to Askøy – which I will then of course bitterly miss afterwards… I am here for 3 weeks now and it feels a long time as much has happened – in and outside my head.

The Bergen art community is a vivid one and not too big for seeing known faces and having common friends with friends already after a short period. Friday is the day for openings. As opposed to Germany, an opening isn’t meant to be an event for the entire evening, not even for the crowd of the respective space/gallery itself. Communication is obviously good as Friday schedules are visitor friendly: You can do 4 openings on one evening, at 18, 19, 20 and 21h. What you see is not only a wide range of artistic expression – national and international – but also a large variety of spaces: from tiny to huge gallery spaces, from stucco or barroque-like interiors to trashy former warehouse halls and hangars.

I am continuing my research on the viking voyages in the North Atlantic, being more and more fascinated by their bravery – or should I say improvidence? – of sailing without maps and charts and oviously lacking any really useful tool for navigation (the navigational compass was in fact invented around the same time but as far away as China; in Europe it was first used in the late 12th century). They could determine their latitude within a certain accuracy but the longitude was not measurable for them. So, they didn’t even know where they were as soon as they lost sight of prominent landmarks. And yet, they discovered Iceland in the ninth and Greenland in the tenth century – and compared to the voyages from Norway to Iceland and from there to Greenland, America is only a stone’s throw away from Greenland’s westcoast. So, it is actually not a big surprise that the Norsemen (or Vikings) landed there at some point. And so they did as proven by archeological finds in L’Anse aux Meadows in Newfoundland – but where and how far they went from there, no one can say for sure. The discussion about where or what Vinland was goes on among scholars to the present day. It has been located from Newfoundland all the way down to the Carolinas, in the Gulf of St. Lawrence, on the shores of New Brunswick and Nova Scotia, near Boston and at Martha’s Vinyard. Vinland, it seems, was not only fuelling the Vikings’ phantasies as being a land of marvels – that of course it has never been for them, as they abandoned it again after a short period and only a few expeditions. The reasons for this were plenty but among the most fundamental seems to be the fact that even Greenland was only sparsely settled – there weren’t simply enough men available to found a new colony far away if Greenland wasn’t to be abandoned itself.

From what I have read so far, I believe that L’Anse aux Meadows was the Northern outpost from which Vinland was to be explored. If I had been in Leif’s place I would have sailed into the calm waters of the Gulf of St. Lawrence and Southwest-wards to the shores of New Brunswick. There, you can find all the valuables that were of interest to the Norsemen: Hardwood, pastures for their live stock, wild wheat and grape vines. And if I had found all this I wouldn’t have gone any further South either, only lengthening the way the precious goods had to be brought home to Greenland. 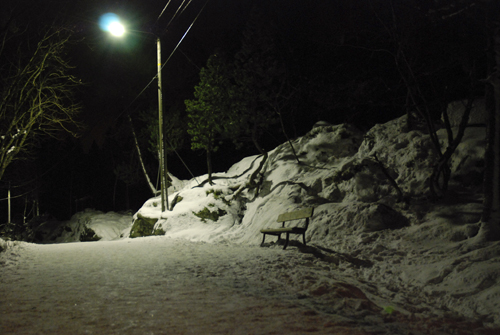 Yesterday, me and my studio neighbour and co-AiRer Giuseppe Gavazza went up mount Fløyen by night as there was a promising forecast for Northern lights and we thought we’d have a good view, unspoilded by the city lights from up there. Well, everything was brightly illuminated as some lost souls even ski up there at night! So, we went back down following some extremely slippery paths looking for darker places – and we were not the only ones: We met others in search of the Aurora Borealis. But in Bergen, we weren’t lucky last night: The Northern lights were really weak at our latitude (as I was told by friends from Hernar who could hardly see them even from out there) and with all the light pollution from the Bergen region – which in other circumstances can be so beautiful – we had no chance to see them. In Tromsø, the lights must have been amazing, they say…