I have been to Fogo Island for the weekend with some friends. Apart from the natural beauty of this place, which everybody around is admiring (and they are right!), it is the location of the Fogo Island Arts Corp Foundation residency program, initiated by Fogo Island born millionaire Zita Cobb. The residency is well known within the art scene right now, as it has been intensively advertised at all popular internet platforms during the last year. The studios that can be seen on various websites are architectural artworks themselves. Getting there and having a look myself, my first impression was how well they are integrated into the surrounding landscape. But they are all out of the way from the next community, which I do not believe to be very practical for a regular use as a studio only (and not as a living space). When I went to the Squish Studio out of Tilting, I also wondered how they managed to build a bathroom into a structure on stilts above a rock…!? 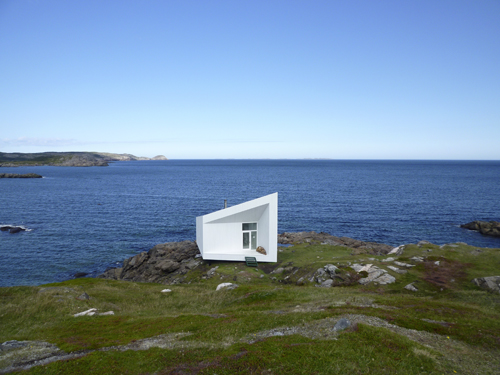 The Squish Studio near Tilting, Fogo

The Long Studio is a 15 min walk on a hiking trail that starts way out of Joe Batt’s Arm. I am not sure, if I wanted to walk that distance every day to my studio… When we got there, I was struck by the view of a portable toilet that had been placed right at the porch of the architecture award-winning (!) building! So, isn’t there a toilet integrated into the studio or what??
Apart from that, I thought that I myself would not feel comfortable working there: exposed – as there is a glass door and front through which the whole studio space is visible – in a building that lies along a trail and is an attraction for visitors. These studios seem to be built as art works themselves rather than being places for creative production. And as a matter of fact, all three studios that we visited (the Tower Studio in Shoal Bay included) were empty at the time we were there… 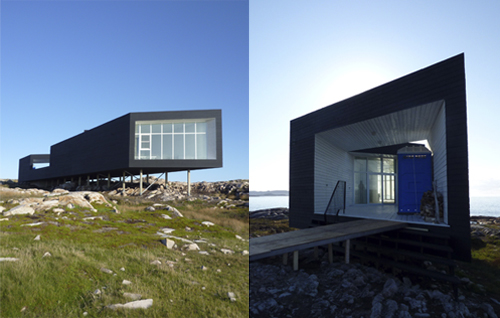 The award-winning Long Studio with portable toilet on the porch

I prefer my little cabin at Terra Nova Park – though I feel quite isolated during the night time now, as even the guys from the Coast Guard, who resided next door have gone home after Labour Day. My work is progressing and everybody from the staff is very accommodating – as far as their jobs are allowing for. This is the difference between a residency program at an organization dedicated to the arts and a non-artistic one: At Terra Nova Park, the residency program is a side event that is well appreciated as long as it is not colliding with other duties; nobody is actually responsible for the program or the visiting artists and their needs. They rely on the kindness and commitment of the staff members – who are there, but mustn’t be taken for granted. This is just an observation and apparently related to the policy of Terra Nova Park (and this is different in Gros Morne, I was told): the support of the residency program is officially confined to the provision of an accommodation. And although the support is already exceeding this by far – only consider the fact that I have been out with the Parks boat several times! – one might suggest to the Terra Nova Park management to think about establishing an official position or a field of responsibility within an existing one that is explicitly dedicated to the support of the residency program.