Canada: Chaudières and anticipation of Newfoundland

We had a meeting on the Chaudière project yesterday: ten people with different backgrounds – from art, architecture, heritage, urbanism, conservation, media – with different perspectives on a commeon interest, the preservation and appropriate development of the district. To achieve this, our idea is to first create a public awareness of the place which – wondrous enough – does not presently exist. While this first meeting did not have much concrete outcome besides the articulation of shared ideas and goals yet, we decided upon creating an entity to be able to address other organizations and institutions.

There was a time during the last week when I had come to the point to ask myself what role I (being based in Germany) could actually play in a project based in the Ottawa/Gatineau region, or if there would be any role for me at all. Wouldn’t it just add to my frustration that I sometimes feel when I am back home in Germany, missing Canada so much? Was it a mistake to engage myself in that direction altogether? Fortunately I have come to the conclusion that it was not. The reason I got excited and engaged when Mark (T. Brandt, architect/urbanist) contacted me after he had visited my online pano tour of the Chaudières is, that I saw the chance to create another (professional) tie to Canada and a region/subject that is of such interest to me. And this is exactly what happens: I might have come to Ottawa anyway to meet friends, but adding a professional component to my stay here made it much more intense and sustainable. So, although the next meeting will take place without me, I will play a role in the project by further elaborating its concept and structure with Mark, Robert (Tombs, artist/graphic designer) and Jean-Yves (Vigneau, artist) which I know will also keep me updated on their meetings and other related filed activities. And I have already been playing a constructive role so far as well, among others by making the contact between Mark and Jean-Yves…

As a conclusion for the Chaudière subject – which will gradually stand back starting from to tomorrow, when I leave for Newfoundland – I give you the link to my virtual panorama tour which I extended by 9 new panoramas that are marked in green (as opposed to orange) as the tour now reflects the site also in different seasons (my stay in 2010 was in February/March): http://www.rangsch.de/chaudiere_tour/start.html

I will now direct my thoughts towards Newfoundland and its history, notably its discovery, early settlement and perception in Europe. I have actually already done respective research at the Library and Archives of Canada this week. And I just received an email by the head of the history department of Memorial University, St. John’s, that he would meet me on Monday. 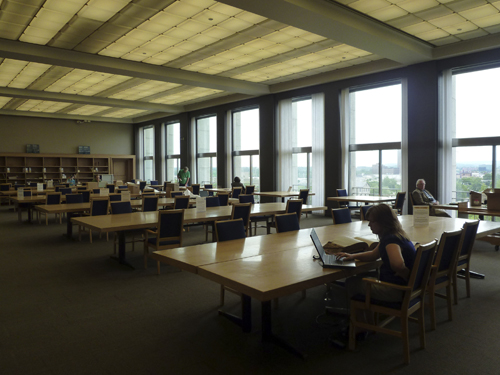 Reading room at the Library and Archives of Canada, Ottawa