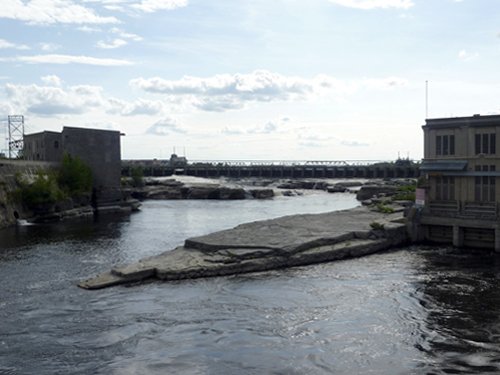 In the back: Ring dam from 1910 taming the Chaudière (Kettle) Falls

The last three days were busy with meeting people who all have an interest of one or the other sort in the Chaudière Islands, the islands in the Ottawa River that I had discovered and explored during my last year’s residency and which most people from the region simply seem to ignore. (I include once more the link to the virtiual panorama tour had I set up which gives quite a good impression of the district: http://www.rangsch.de/chaudiere_tour/start.html) There is Mark Brandt, architect and urbanist from Ottawa who is occupied by the subject for twenty years now, having elaborated a master plan for the NCC (National Capital Commission) in 1991 to form basis for reasonable reuse of the place – which had not shown any result from the government side to the present day though. Then there is Owen Mahaffy, Director of Generation from Energy Ottawa, who (along with Domtar and Hydro Quebec) run (hydro) power stations on the islands. And there is colleague and friend Jean-Yves Vigneau from Hull (Gatineau, on the Quebec side of the river) who is not only a gifted artist but also an experienced and well known organizer. We all share the passion for this unique district that is characterized by powerfull nature and the impact of timber, paper and energy industries that have governed the place since the early 19th century, as well as the fear that its uniqueness might be destroyed soon if one does not create actual public awareness of the place. We are in the very early stage of thinking about an art project on the islands in which we would like to involve various art organizations on both sides of the river that are located quasi in a circle around the islands which themselves lie actually in direct neighbourhood to Parliament Hill. 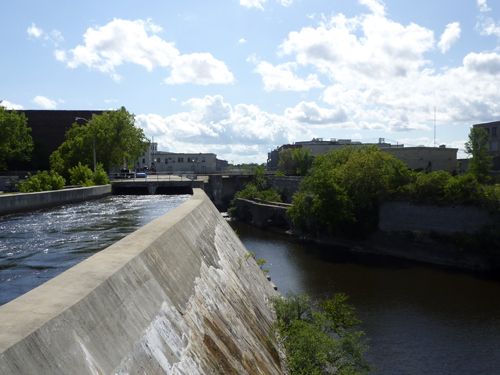 To be back on the islands was and is an intense experience for me. I have dealt with this place for so long – during the residency in 2010 and while assembling the panorama tour when I was back home – that it is almost feels I never really left. And yet I must have missed them as I feel so happy to be back. I have taken several new panorama shots to possibly extend the tour – one in a prohibited area that was always blocked by a high fence in which I now found a hole… I have now actually arrived in Ottawa with all my senses.