This comes from my other home town, Baroda, India, where I have been for the past two weeks. I underwent a small surgery on my eye and all was a blur for a while but am now able to “see” again clearly. Before arriving here I had told myself that this trip is to bring myself back into health again, and that I must NOT fret about or attempt to do any work. But its been a challenge to stay still, and unable to read or sit at the computer has been frustrating to say the least. Summer has arrived in full force and with the temperature already hitting the 40s there is little else to do between noon and 5 pm. Best to find a cool place indoors, and so I find myself penning this and working on the ongoing Negotiating Routes project that I initiated in 2009. Sorting through the project’s images taken last monsoon and winter in Wadhwana what becomes apparent is how quickly the landscape has changed – from the green and cool of the rains and winter, to the dry, dusty ochres and browns of now.

As always, each time I return to Baroda (and India) I find myself in the process of realigning myself and coming to terms with that which was once very familiar and has now undergone drastic changes. This is more so with my immediate surroundings, and as if to stir my memories even more for the last 4 days the newspaper has been publishing historical data about the city including ‘then’ and ‘now’ photographs.  This in many ways offers a fresh mapping of this rapidly growing urban environment and I am somewhat able to “find” places and orient myself again. So I can stand at a corner of a busy street in the city and say to myself – “aha, this what is now a jumble of shops is where the art deco style house stood” And, with much alarm, “how dare they cut down the majestic Banyan trees that used to line this street!” So it goes… 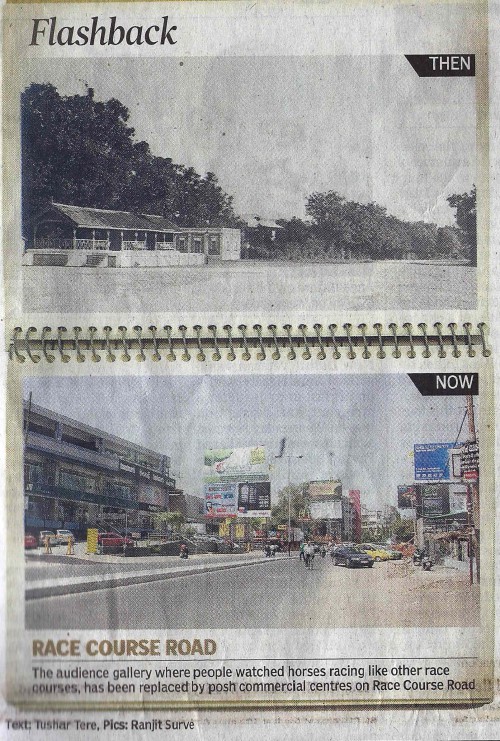 from Times of India 7 April 11

Recently conducted sensus says India’s population is now over 1.21 billion, up from 1.02 billion in 2001, and 17.5 per cent of the human race lives in the country. One related fact/figure has, disturbingly, gotten even worse.  The child sex ratio shows a sharp decline – the number of girls for every 1000 boys in the age group of 0-6 years stands at a dismal 914, down from 927 in 2001, and this, the government says, is a “matter of grave concern”. For a country where many Hindu Goddesses are worshiped, girls/women are ultimately not welcomed, nor respected.

Another matter of huge concern is the rampant corruption in the country with most politicians pegged at being at the top of the money-making heap. The “people” have had enough.  A movement to bring those involved to task and to push the government to pass a bill which would establish full transperency is spearheaded by a veteran 72-year old social activist, a Gandhian – Anna Hazare, who is on a fast-unto-death till a stringent anti-corruption law is enforced. In the scorching heat this frail figure sits in Delhi with an image of Mahatma Gandhi behind him and is mobilising the young and old in the country to come out in support.

Last week, in frenzied celebrations that united the people across the land, the haves and the have nots equally, as India won the world cup at Cricket, all pressing issues were briefly forgotten. Now, the social, political, economic chasms are back in play and threaten to boil over with the rising mercury.