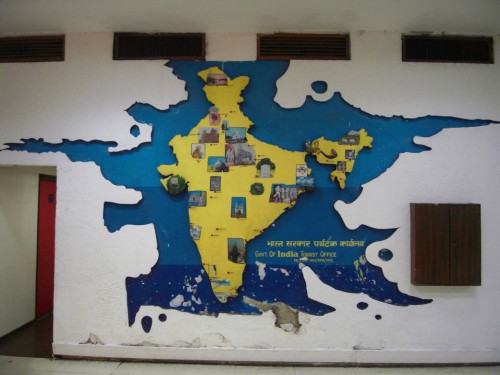 Just checked out India, passed the immigration desk. Tired of India, got sick on the last days, diarrhea. After finnishing the Banyan exhibition at Banaras Hindu University in Varanasi, after packing and transport back to the hotel, christine and I wanted to celebrate. We went to a “better” hotel aircon restaurant, ordered 2 special tea”, beer served in teacups, ate a mixed meatplate. Next morning it started, continued now for 2 days. We had to chancel our supposed sightseeing trip in Varanasi… Hard lesson: Never postpone something good to later, it could be to late. But, I have another reason to return to this wonderful and crazy place. 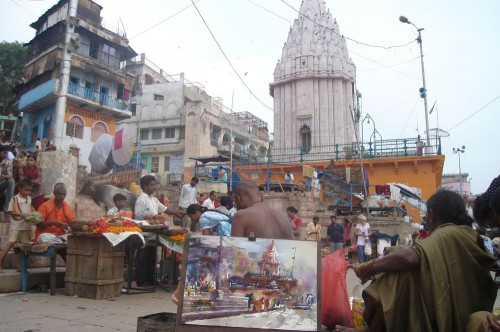 At the Ghats in Varanasi

If you want to have an impression of humankind of all times, from the times of nomades, beginnings of farming, to dark ages, medivial castles, pre-industrial manufactures, to the 21st Century, India is the perfect place! But: The casts and the Karma are the very best PRO argument to accept the poverty, not feel bad about individual luxory. Everybody has a chance here, in the eternal wheel of life, in reincarnation. The indian towns seams to colapse in traffic jams, wate, cow shit, dust and dirt of 1000s of years. 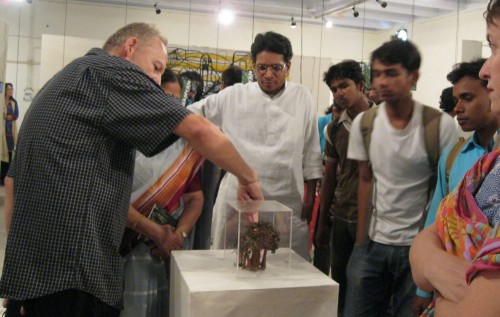 Opening of the Banyan exhibition at Banaras Hindu University

In 2007 I brought the Banyan Project to India. Varanasi was the selected place for it, because of an invitation by an brasilian-indian artist couple, the Rainbow Children. We made Banyan Workshops in 3 places, at Premyoti Integration School, Gangotri School, and at Banaras Hindu University Faculty of Visual Arts. The Rainbows and I had a difficult time together. Let´s say we had very different life concepts, different styles of time management, of trust …., but anyway, we made these great workshops with some wonderfull results. So I wanted to bring the Banyan Exhibition with its worldwide context back to Varanasi. What is the Banyan Project?
Have a look at www.banyan-project.de 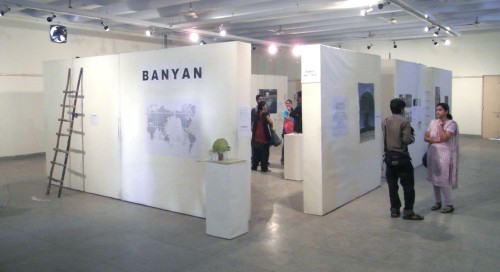 View into the exhibition

For this project, I asked 50 artists from 20 countries to give an art piece, related to the Banyan Tree, into the project. On the basis of these art works, I realized Art Workshops for children, young people, students etc. Together with artists conected to the selected areas, or sometimes alone. The exhibition The Banyan Tree brings the results of these processes back to the most important and sucessfull locations, also to Varanasi. Madan Lal Gupta, Banyan artist and teacher at BHU invited us to come to Varanasi. It was a complicate realisation, with many compromizes. Times and locations had to be changed several times! Lucky, we booked our flight back with a big enough distance of 3 weeks. Fineally, the event took place in the last week of our stay. 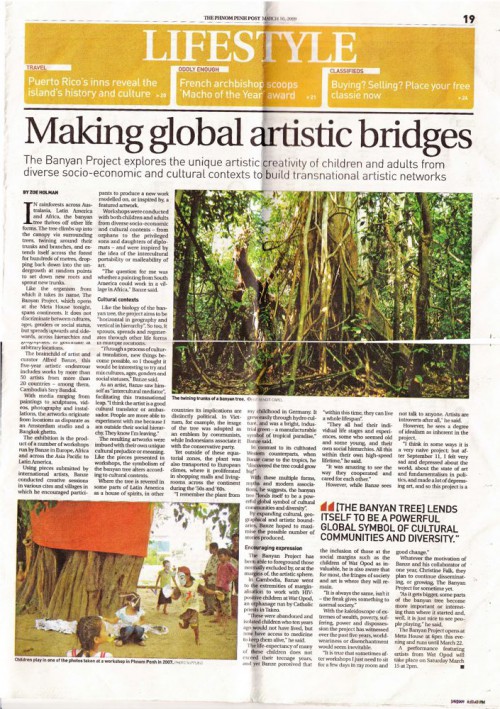 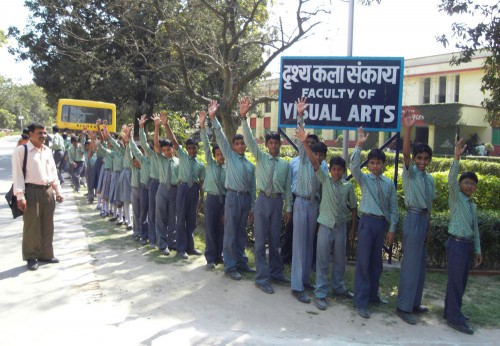 On friday, 11 march, we organized a Banyan Kids Day,  100 children came, of 2 schools allready involved in 2007 into the project, and another street childrens project of Varanasi. Highlight of this day: A ferytale, developed in 2007 at the workshop at Gangotri School. In the summer 2010, it was interpretated by children at Kinderhaus Sternschnuppe in Berlin-Neukölln. They made an animation film out of it. 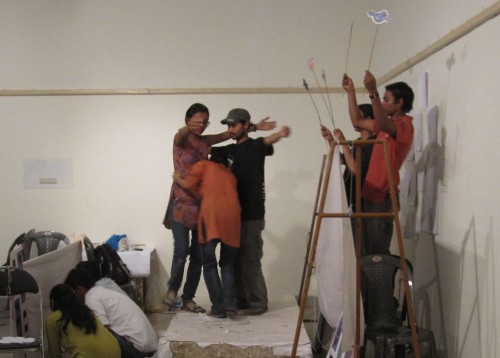 Another highlight of our programm was was the workshop for young artists, writers, musicans. We limited the group to 20 participants. We got 20 students from different disciplines, and 5 teachers. 5 groups developed a puppetry, an installation, and 3 different video films. The final presentation was a big fun for everybody. Many people talked to us later, thanked us, and said, how inspiring everything was. Now, they hope to get more of these guest events in the future. 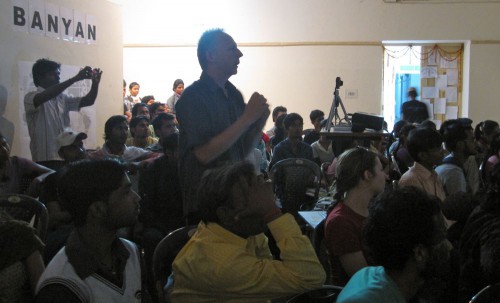 Public presentation of the workshop results

Maybe, this is only a “waterdrop on a hot stone”, but somehow, this is intention of the Banyan Project: It is all about gestures, testing options, bring things and people together, traditional arts and contemporary ideas, mix them up, accelerate their influences.