Got back from KL on March 2nd after hectic 5 days filled with meeting old friends, and making new ones… and presenting at the Performance event. The part of KL we, the artists were staying in, I was told by one of the local artist, is the ‘sin’ quarter. This is where EVERYONE comes to party, to eat, drink, smoke whatever, and to find partners for a night or two…. Away from this, in the city and in the countryside things are different.

Buka Jalan (open road) performance fest was organised 5 years after the last international gathering of performance art and artists which was stopped in its track after 2 artists, one Malay and one Indonesian presented works that touched on “religion”. Someone from the audience called the police, and the organisers were put through the paces thereafter. It took 5 years to pick up the courage to bring another international event together.

This time around, a performance by a local artist was stopped for the same reason, and the organisers spent a tense 24hrs to see what the repurcursions would be. A security guard had threatened the artist in question but he managed to get away before things got ugly. Next day at an open discssion session many questions were raised, including the safety and protection of artists. If guards at the National art gallery are there to protect the “art”, performance art involves human bodies so should they not be protecting these “art pieces”?

For me, Performance art is a generative force that is unpredictable and challenging, it opens up unexpected, thought-provoking and at times highly immersive encounters and this is essential to question the status quo in our society.

Here are some photos of my performance When Two Words Fell presented at Buka Jalan (open road). In this performance I punch holes in a book, an old sanskrit text called “The Laws of Manu” (The Laws of Man). The book provides guidance about how hindu society should conduct itself. I work with chapter 9, which particularly outlines a woman’s role in society – as dictated by man, of course. 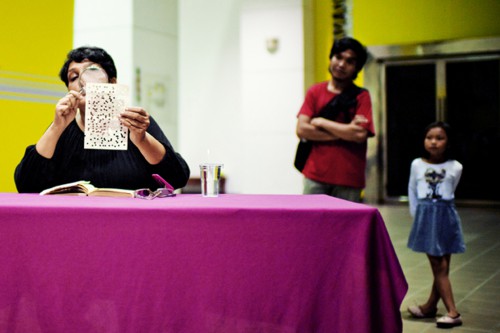 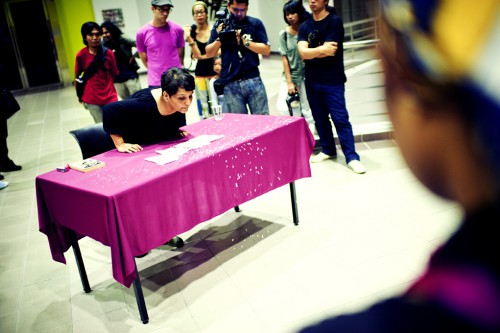 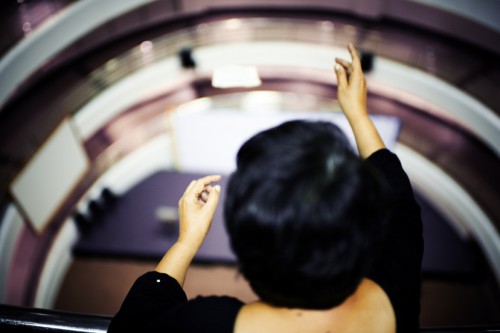