Into the wild: part I

Its quite so-real how plants, creatures, corals and anything else seen undersea can naturally be in such vibrant psychedelic marker colors, seems almost chemical the extreme glowing of the riffs of Palawan. it´s so beautiful.

5 days expedition out into the heart of the south china sea, i had no idea what i was getting myself into. very happy i did though, otherwise never would have ended up living for the past month on my remote beloved island Cadlao.

it was a crazy journey that just kept on getting more and more unbelievably pretty by the hour. the farther we got from mainland the more i was amazed. every day I found myself in a different life threatening situation, once it was climbing up a limestone cliff followed by a 30 meter jump off  into the sea, another was swimming through an under water cave in the dark. no matter what we did, it all involved high adrenalin pumping. 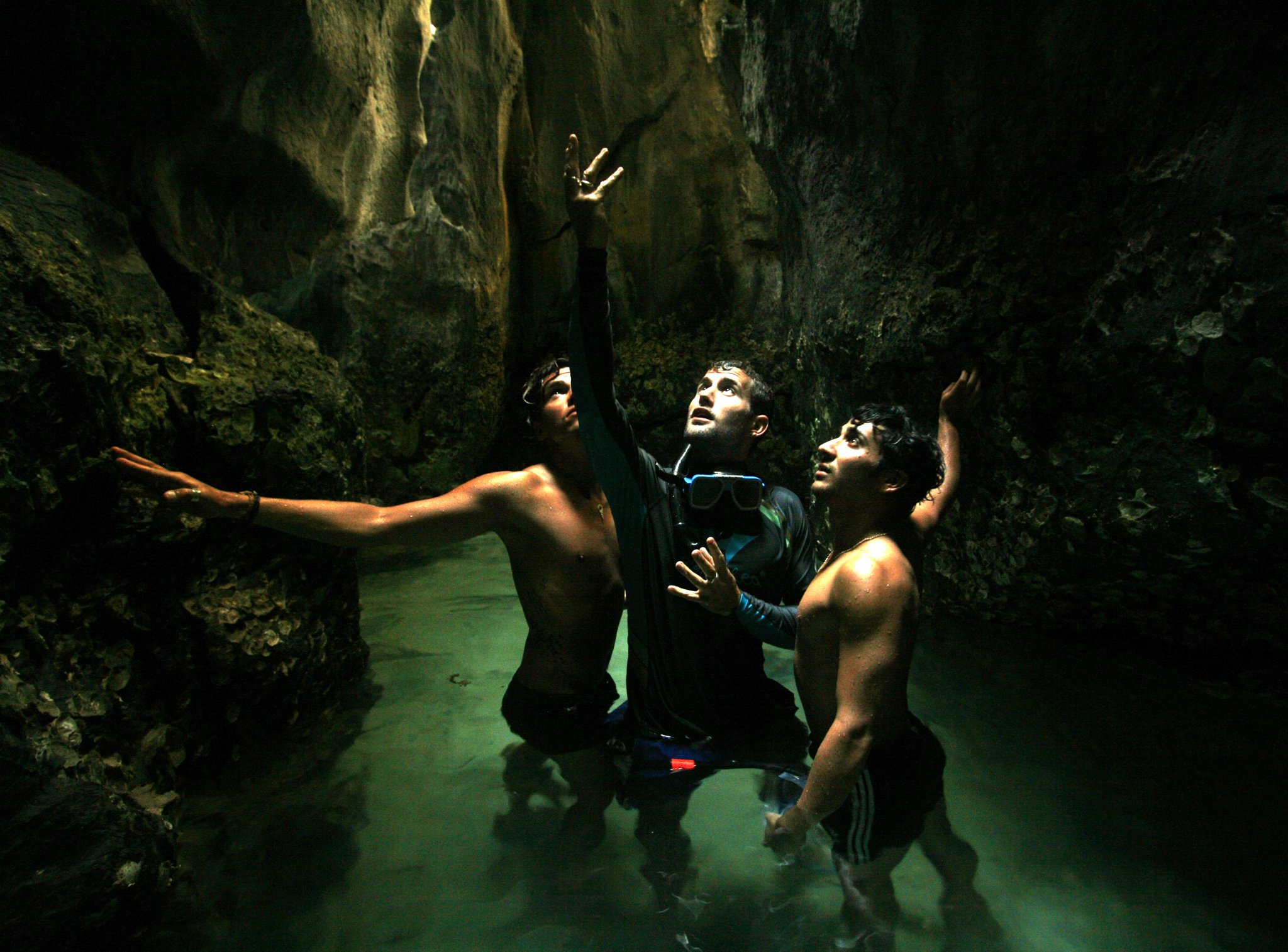 (Melodramatic posing in one of the caves. third one on the right is me)

On an island called Darakooton a pig was killed by the others. I used the excuse of being a jew to skip the swine dinner, though the real reason was because I´m vegetarian. It was a sad site to see the poor animal twirling over the fire with a bamboo shoved down its throat and out its rectum, but at the same time it was also an interesting photo subject. it reminded me of that talking pig head scene in the movie “lord of the flies”. 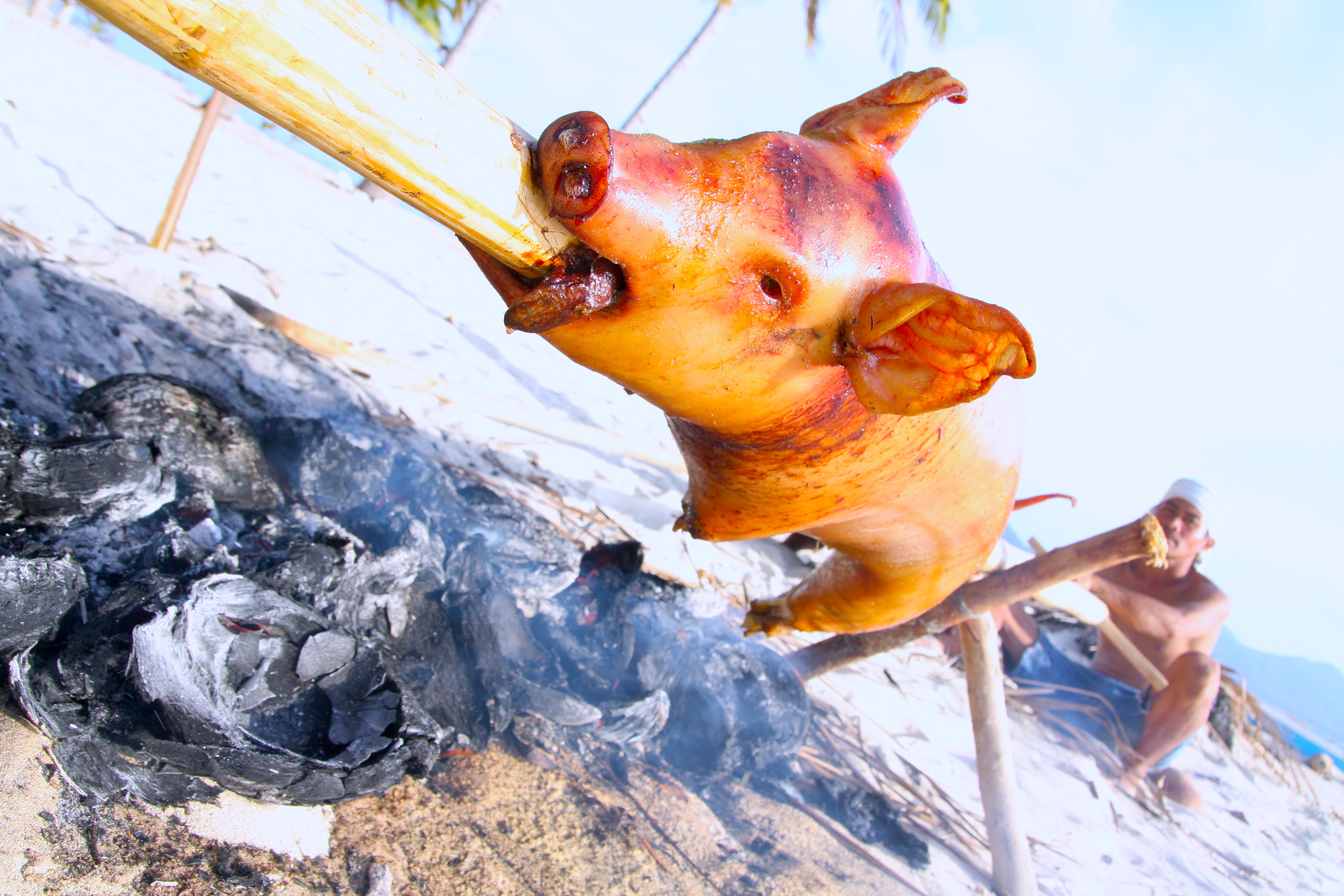 (The poor piggy from Darakooton)

I´m to be of the last to witness these magnificent Palawan islands in their still pure virgin state before the area becomes gentrified, that’s the expedition captain´s theory at-least. he predicts that within 3 years this whole sector of the Philippines will transform into a resort mania filled up with rich white people. All the magnificent untouched islands will be sold out to millionaires with pressure upon the islanders by the corrupt government, and the locals will be kicked out of their tiny villages where their families lived for generations.

The transformations in Palawan are only beginning. same thing that happened in the islands of south Thailand the last ten-twenty years(words of a old white bearded wise looking traveller i met in the town of El-Nido)

on the last day of the expedition i saw Cadlao laying there amongst the hundreds of other scattered limestone islands that looked like they were all once connected to each other millions of years ago. It was love at first site. last time i fell involve with a location it was when i first arrived in Berlin..

on that part of the island stood the eco Tao Village tucked amongst the thick tropical forest facing a rugged wild beach.  no electricity or running water there, just 9 bamboo huts and a freshwater well beside the organic vegetable gardens. the TaoPhilippines organization are who’s behind the expedition. I knew I must stick around, one thing led to another and I ended up being invited by the Tao family to stay and do an art residency on their island. all my previous plans have been spontaneously differed. not going to carry on to india yet, every thing has it´s own time i guess.

Been here for more then a month now.  Don’t want to leave.