This morning, before Doris departs for Krabi I relate to her part of a dream I had in my waking moments.

.. I was on an airplane and a few seats ahead, a woman stood talking softly in the aisle… I asked myself (still in the dream) where I was, which part of the globe the aircraft was flying over…? a feeling of panic started to rise within. All was motionless, with a strange dawn light outside punctuating the horizon and dividing the land from the sky, night from day. Amid the growing panic I started to hear the coo-hoo, coo-hoo call of the Koel (Asian cuckoo bird). Relieved, I thought to myself (still in the dream) – of course, I am somewhere near home….

This last thought woke me up, to hear the actual call of a Koel from a tree somewhere in the neighbourhood. At first the song was gentle but soon it picked up strength and its desperation started to grind. Last summer I found myself waking before 5 am on a few mornings and chasing a Koel away before it settled down and decided to make the mango tree outside our bedroom window its daily routine, albeit transitory, stop…
Incidentally, Koels lay their eggs in the nests of others letting them do the hatching and are known as brood parasites. They are solitary beings and seldom seen in pairs.

We finished packing up the Pattern & Signs exhibition yesterday and Doris came over to stay, which gave us a chance to continue with unfinished conversations and start new ones. I have known Doris since 1996, from my early days in Bangkok, and she is the one who initiated and invited me to the P & S project. And, connecting with other artists in the project, Alfred and Christina, also explains why I am part of this blog-site now. That is how it usually goes for me, and I like it – one thing always leads to another.
Back to P & S. It has been strange to once again deal with and exhibit at a conventional gallery space in Bangkok, aspects of which I had forgotten about, put behind me. I had forgotten what it is to negotiate the mindset behind these spaces that sets the rules, the dos and donts that simply do not gel with most artists I know. The last run-in was at BACC (Bangkok Art & Culture Center) in 2009 where Sakarit and I presented the performance ‘Somtam Nomad’, which in many ways raises question as to what the space represents.  http://www.varshashavar.com/asia_topia.html

There was some amount of sorting travel dates and flight time tables/prices going on last night as Doris and I sat at the computer trawling through travel websites. Booking to go to Berlin in May for the next chapter of P & S I found myself searching over and over again in the inbox for the e-ticket to Kuala Lumpur where I will go to present at the Buka performance event later this month. But occupying my mind was finding the time this March/April to go to Baroda, India, again and spend a length of time with my mother who is ailing, and how I must decide dates, find a cheap airfare and book soon. I must get there soon… This, along with other things vibrating the mind, probably explains the early morning dream of which the deeper layers of interpretation also offers some comfort at the end – that of a familiar birdsong.

On a perhaps related note, here is an image of an intact snake skin I came across amidst the ruins of Sukhothai that I visited over the Chinese New Year break last week.  I am convinced it is that of a python (it is a long one) – the wild creature still seems to make its home in the manicured grounds around the ruins and feels comfortable enough to use the stones to molt in peace.  Or, did this lengthy process of shedding skin happen in transit – whilst it was on its way in search of a forest nearby? 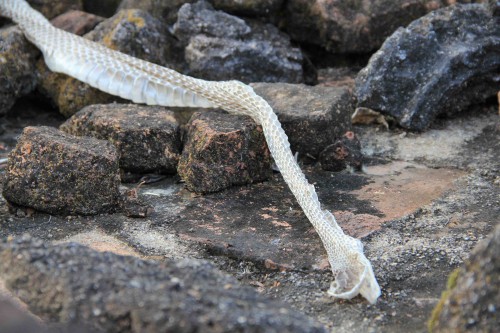